“Zero Dark Thirty” and the marks of women 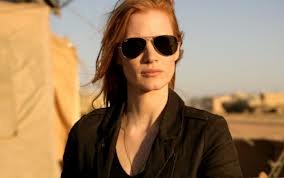 The mission starts at zero dark thirty and ends with Osama Bin Laden dead. The search begins well before that: right after 9/11 and with Maya, a high school graduate turned CIA analyst, and her subsequent relentless pursuit of a lead she’d uncovered, a man rumored to be Osama Bin Laden’s courier.  Few others believed the lead was a priority. She believed, and she was right.

Directed by a woman (the fabulous Kathryn Bigelow of “The Hurt Locker”). Hunted by a woman (Maya, played by Jessica Chastain). Bin Laden’s location uncovered by the courier’s love for a woman—his mother, whom he liked to call from the streets of Peshawar and Rawalpindi. The marks of a Woman are all over this film. There are also some intriguing men, particularly the disheveled, handsome torture master Dan, played by Jason Clarke. 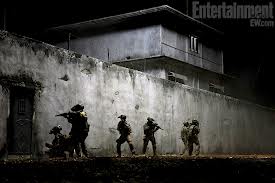 Not to mention the team of Navy SEALs who raided the compound in the dead of night (12:30 a.m. to be exact, Zero Dark Thirty in military jargon), hunted down, and killed Bin Laden when not everyone was sure he would even be there. Maya was sure and it’s her confidence that’s driving them, too. “How sure?” She is asked, seated around a table of suited men who have collectively agreed on a probability of 60%. “100%” she responds, then changes her answer to 95%. What woman is ever 100% sure? She is. Note to self: show some goddamn confidence.

Retribution? No. But at least the hungry tiger inside you is fed. This is how they hunted down and killed the man responsible for 9/11. You won’t blink and you won’t budge until you see the bullets spray into his chest. The film exceeds all expectations. I was exhausted, and no less than exhilarated afterwards. Two-hours-and-forty-five torturous minutes before I could breathe normally again, a high from the tension, the suspense, the uncompromising direction, the power of brilliant filmmaking. Closure.

I take it back; perhaps I did experience a few faint heartbeats of retribution—we got him—but it lasted for only a minute, then it was gone.