Your Sister’s Sister…and mine 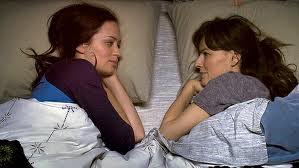 I’m a sap for sister movies, for sisters in general (hence the impetus for my novel, REEL LIFE). This film, Your Sister’s Sister, gave me a feeling like no other. For one hour and thirty minutes I was back in the bedroom that I shared with my own sister, lying side-by-side murmuring aimlessly into the night, pretending we weren’t wondrously afraid, confused as we were, by the disgruntled din going on in the world outside our door.

Even when I visit my sister now, I find myself unconsciously following her around the house. You’d think this would be impossible given that she’s got four kids following her around too. But suddenly, there we are in the bathroom—she curling her hair, me trying on one of her blushes (her kids off somewhere, probably ransacking the kitchen)—I’m not even sure how we found ourselves there. I might glance at her to see if she’s remotely bothered by my proximity, as she might have been back when we were teenagers, and then I realize, no, my presence is innate for her too. Kinetic energy seems to gravitate sisters towards each other, born out of all those nights you fell asleep listening to the other’s heartbeat. And the older you get, for all the distance and rivalries, that energy only becomes more intense.

Two sisters and one guy, a bottle of tequila, a cabin on an island in the Pacific Northwest, it took the director Lynn Shelton twelve days to shoot this film, saying everything I would ever need to about the waste involved in blockbuster Hollywood productions. Your Sister’s Sister is sublimely simple, a film that lives and breathes. 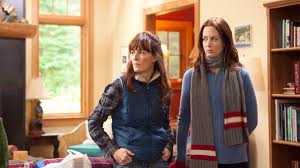 Beyond the intimacy of the camera work, certainly it was the acting that held me. Emily Blunt was wonderful as the younger sister Iris, and Mark Duplass was endearingly raw and uncouth as Iris’ best friend Jack. It was the actress Rosemarie DeWitt, however, who gripped and held me. She plays the older sister, Hannah, who has come to their family’s retreat to be alone after a breakup, but runs into Jack, who has gone to the cabin, upon Iris’ instructions, to work out demons of his own. Bring in the tequila, a drunken encounter, the arrival of Iris, and the story propels itself both hilariously and heartbreakingly from that point on.

I got the feeling DeWitt wasn’t acting as much as existing. She also played the older sister in “Rachel Getting Married,” and I was no less drawn to her then. I wonder if she’s an older sister in real life, for it’s a trait she exudes, the quiet warmth and earthy allure, the stoic, pulsing wisdom, however flawed, however vulnerable. It’s strange, really, how I immediately identified with her as my own.