Yes, that’s me, about to kiss Richard Dawson 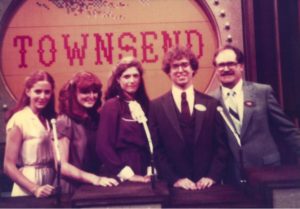 He died Sunday, at age 79, after “somewhere in the vicinity of 20,000 Family Feud kisses,” of which I was one. 1983. The youngest of four siblings, three girls and a boy, the oldest, I’m pretty sure it was his idea even though he barely watched the show. It was the two youngest there on the left who watched the show, religiously (this, our warm-up for episodes of Ryan’s Hope, One Life to Live, and General Hospital). And since my brother’s bedroom had been taken over (by me) practically the minute he’d received his college acceptance letter, summers home for him meant the couch. The couch that just happened to sit before our one TV, this, a time when people didn’t think it necessary to have multiple TVs, a time when families watched TV together, instead of dispersing across separate rooms.

My sister and I tried to keep the noise down, but every time one of those clearly talentless and unexceptional families won the five grand we couldn’t help but gasp and moan. He’d fume for being woken, then, the idea guy in our family, the guy always looking to make it big, he’d stare at the TV and ruminate. Our brother, after all, was smart, on the debate team and all that. The oldest sister a math major, our father the master of crossword puzzles, how could we lose? We dragged the math major out of bed at noon—early for her—and gave her the news.

But it wasn’t she who needed convincing.

It was our father who needed convincing. You see, he was circumspect with regards to “sure thing” endeavors, the ones that often led to “no thing” followed by lots of disappointment. As a marriage and family therapist he took particular pains not to “damage” his children, to preserve and nurture their tender, pre-adult psyches. Plus, his confidence level, after a painful divorce, wasn’t exactly at its best. He disparaged the idea, hesitated, consulted therapy books, stalled, but at last he caved, no match for his children’s hungry desires.

We practiced. See, the whole show was about wild, unabashed enthusiasm. In essence: screaming, cheering, whooping, and clapping. And being a family of athletes, sports fans, and competitors at heart, we had a particular knack for this. The audition was a breeze.

Everything after that is vague. Twenty-nine years of it. And now my dad is dead. It was sudden and unexpected, not unlike Richard Dawson’s death. There was a service, and the day after all the families convened at my brother’s house, the kind of house with more TVs than rooms, the kind of house you could get lost in, what we needed, apparently, for while swarms of my nieces and nephews splashed around in the pool, the rest of us wandered around in a state of shock and stupor.

At some point someone slipped the Family Feud DVD into the drive and once the rumor got around the house began buzzing as the kids flocked to couches, toweled and dripping, because who wouldn’t want to see someone they knew on TV. Certainly they’ve all seen this before, I insisted. But no, there always seemed to be that one kid who hadn’t. I was quietly backing myself out of the room by the time my brother got the player working and those famed, mustard colored walled doors slid open. TOWNSEND split into TOWN and SEND, and then there we all were, poised, seated in our straight-backed positions, as if frozen in time. Then that incessant dinging, our queue to come to life, and with all the abandon we could ever fathom per instructions.

By now I am in my brother’s living room pretending to discipline the cat.

I’ve never been able to watch the rerun. My siblings adore it. Well-adjusted adults, they are able to laugh at themselves almost thirty years later: the Farah Faucet hair, the eighties dresses, the mustache, the three-piece suit, and hard rimmed glasses, because who wouldn’t? Me, that’s who, at the end of the line, so painfully shy…and that kiss, I was blushing from head to toe; and my dad for another, at the front of the line, trying so hard to be the father everyone expected him to be, on TV anyway, like Mike Brady for instance—cool, relaxed, funny, successful—the father my father expected to be, what became so convoluted after the divorce.

I don’t need to see the show, I reminded the cat; I know how it ends. In an exciting, dramatic win for our team, a win that my sister and I—the darling and inconsequential redheads—will forever be able to rub into the faces of our older and, at the time, more accomplished siblings, for if it wasn’t for our “survey says” buzzer beaters, our family would not have been brought back from the brink of defeat and won in fantastic, masterful fashion! Even if some of our other answers were pretty lame. “Name something that falls from the sky.” People? Or, “Name what you buy when you get your first job.” Papers and pencils? Sure, bantering with my siblings about our answers is fun, but banter is one thing, watching my father go stiff for the good three minutes that Richard Dawson spends chiding him about being divorced AND a marriage and family councilor is another. I watched my father age in those three minutes, the man who only ever wanted to make us proud.

So here I hide, in my brother’s garage, unable to get far enough away. For wherever I go I can still hear it, that painful ding. “Survey says?”