Why must Caesar die? 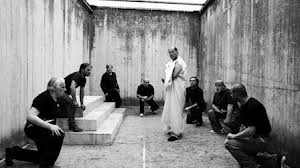 My dad used to recite Shakespeare, often and at random, mostly when he couldn’t find his own words. “To thine own self be true,” he might say to me. My responses were either to stare at him blankly or roll my eyes, lest he see that I was intrigued, for Shakespeare’s words seemed to transform my father into an alternative person, this breathtaking, glorious force. Acting freed him in ways life couldn’t.

As it does for the men in the Italian film, Caesar Must Die. Real-life drug traffickers, criminals, murderers performing Shakespeare’s Julius Caesar from within the walls of a maximum-security prison outside of Rome. Filmed in mostly stark black and white, in what the prison calls a “theatrical laboratory,” the men move around the barred and stoned structures practicing their scenes, agonizing over how they will get their audience to understand their characters and Shakespeare’s intention for them, to understand why Caesar must die so that they can remain free. 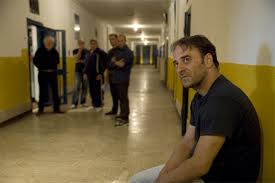 I saw the play at the Oregon Shakespeare Festival when I was thirteen, or I should say I slept through it. It had been a dream of my father’s to attend the festival, and one summer he rented a camper and finally did, with my brother and I along as unwilling participants. Fifteen-hours of slow driving up to Ashland, the only thing I remember about the festival is sweating. The amphitheater was outdoors in heat approaching 100 degrees, and yet I somehow managed to contract pneumonia and wind up in the hospital. Instead of being at the festival, my dad spent his days nursing me back to health, and then after all that we headed home early. 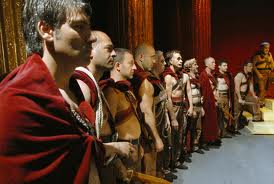 What’s nice about this film, for those of us non-purists, is that the laboratory’s production of Caesar is an abridged version; one hour and seventeen minutes versus the four hours I slept through in Ashland. No thines and thous, in fact the dialogue was so simple and straightforward that I actually, miraculously, understood some of the Italian they spoke (the movie is subtitled). It wasn’t like they were speaking particularly slow. Like Shakespeare had transformed my father he had transformed these men, and perhaps I could read it in their seething, tormented faces. Caesar has died before and he’s going to die again. Again and again, so that more men can be free. Freed from tyranny, and by the sheer form of acting.

Maybe art can be freedom, even inside one of the least free places on earth.