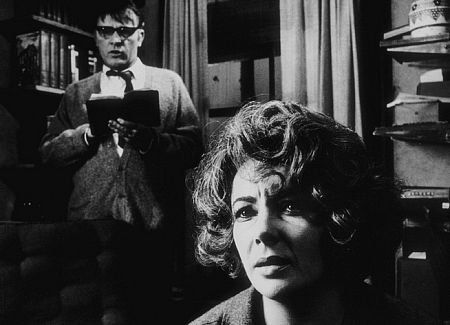 “I am,” says Elizabeth Taylor’s character, Martha, in the movie’s closing scene.

I’d seen the film before, so I knew what I was getting into a few nights ago with nothing to watch and my husband pausing the DVR. He looked over at me. A heavy silence passed. “Fine,” I said. “You sure?” “Yes, go, just do it because if we put any thought into it we won’t.”

Clearly I was in a mood, for you need to be in a mood, a certain state of grey mind, to make it through the film, what feels, I imagine in some way, like going to marriage counseling. I haven’t been to marriage counseling, but I imagine a lot of cringing involved, that which occurs before the flaying, the ripping open. Based off of Edward Albee’s 1962 Tony Award winning play, the movie was directed by Mike Nichols and also stars Richard Burton who plays Martha’s husband George. Burton was also Elizabeth’s husband in real life at the time, this, their second go around and probably why the tumultuous relationship exploding on screen feels so primal, so spectacular. The film plays out in one relentless, alcohol infused evening of scathing verbal (and sometimes physical) sparing and game playing between the long-married pair, and then between them and a young couple they host at their house for drinks. A young George Segal plays a professor new to the University where George has worked for “two million years,” according to Martha, she herself the embittered and ungracefully aging daughter of the University’s president.

Midway through the film I was plagued with the same jarring thought as with all my previous viewings: who the hell would ever sit through this movie besides me and this man sitting on the other end of my couch? Who are these people that feel impelled to watch the unhinging of harrowing, disturbing relationships? The title is a parody on the nursery rhyme, “Who’s afraid of the big bad wolf,” and according to Albee it means who’s afraid of looking at life without false illusions (Virginia Woolf committed suicide).

The film won five Oscars and the play is recognized as one of Albee’s best so apparently there are many people who feel so compelled. But the question lingers: why watch?

“Are you alright?” It was towards the end of the film and my husband was looking over at me. Yes, I assured him not so sure I was alright, for it’s that kind of film, one that takes you to hell and back, a test of endurance.