“When was the last time you had…?”

If you do not wish to contemplate these questions imagining your husband sitting beside you, don’t go see Hope Springs. 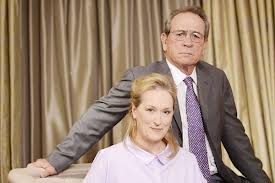 Actually GO. Why not? Get out of your comfort zone. “Do you have sexual fantasies?” I had to stop and think about that one. But I assure you, Dr. Feld’s probing into Kay and Arnold’s thirty-one years of intimacy is so tasteful, gentle and honest that even the most modest of theatergoers will not feel alienated. Steve Carell as the therapist plays this one completely straight. And mesmerizingly well, especially given the acting power sitting across from him on the couch. Meryl Streep brings her mastery to the doting, submissive housewife Kay, while Tommy Lee Jones breathes warmth, empathy, and complexity into a gruff, closed off husband, one who falls asleep every night in front of the golf channel. 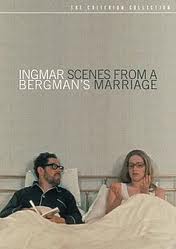 “We’re not really having any sex at all,” Kay, in a dark moment, confides to a bartender, a bit part played by Elisabeth Shue. “Sex?” Shue scoffs back. “Is that all?” She turns and addresses the room. “Let’s see a show of hands. Who’s not having sex?” Arms fly up, and it’s one of the few light moments in the film, for forget how the studios have billed it, forget that the creator also made The Devil Wears Prada. Think Kramer vs. Kramer instead, or the HBO Series In Treatment. Hope Springs is no comedy. This movie is one of the more honest, real, perceptive movies about long term relationships I’ve seen in a while. Ingmar Bergman’s “Scenes from a Marriage,” comes to mind but Hope Springs is much softer and more hopeful than Bergman’s film, which plays at a very disturbing level. He’s Bergman, after all.

“Can you change your marriage?” So Hope Springs begins. “No,” my internal voice flatly responded. I’ve never been a big proponent of couples’ therapy, even though my dad was a family therapist. “There are some things that shouldn’t be said. Once they’re said, you can’t take them back,” shouts a closed off, angry Arnold to Dr. Feld. I’m no Arnold, but I will admit to being one of those closed minded souls who thinks that relationships shouldn’t be that painfully difficult. That they either work or don’t. I’ve softened my tune over the years as more and more relationships have proven me wrong, and my father’s enduring goodwill towards all those troubled couples comes back to haunt me. “There are some couples I see,” says Dr. Feld after spending a week with Kay and Arnold, “That should never have gotten married. You are not one of those couples.” I too felt that about Kay and Arnold, even knowing how intimately disconnected they have been. Perhaps I was out of body, but I came away feeling that if you love someone enough, why not try? “You have to ask yourself,” Dr. Feld says to Kay, “Do you love him more than your pride?” That line really struck me. As a product of modern times and modern relationships, aren’t we women counseled the opposite? To not submit, kneel, or bow down? To not be degraded? To fight for our pride, the last standing bastion of ourselves?

This movie is not just for the over fifty crowd, or the sexually repressed crowd, it’s for anybody- 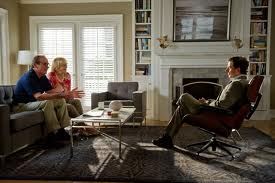 in-a-committed-relationship-crowd, including the sexually awakened subset of that crowd (including young people though they’d never admit it). That is to say, this film is for anybody who can stand the awkwardness, the gravity in places, the nakedness, as if you’d forgotten to wear your clothes to the theater. The reality. The tears.

It’s funny too. When the doctor asks Kay about oral sex, she backs off shyly. “Do you prefer giving or receiving?” he probes on. “Huh?” is her response.

“It’s like one of those makeovers, you look good for a few days and then it’s gone and you’re back to the way you were…” Or are you. Once home, will Kay and Arnold revert back to the way they were before therapy? Will Kay, as she secretly fears, feel less alone without him? The ending is a bit…well…I won’t ruin it here, other than to say, “Hope Springs.”

I still wish they’d come up with a less hopeful title.