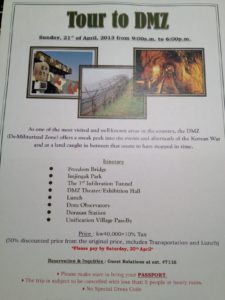 My husband’s in Seoul for business. Once again, the North Korean’s are on a war path. Well, according to the NYT that is, and CNN and every other news outlet. Should I be worried? Probably. Am I? No, not really.

The three times this week he’s bothered to ask a South Korean about their thoughts on the “crisis” these were their answers:

1) Buy stock: during the last crisis the market went down 5%, and then it rebounded.

2) What crisis? You probably know more than me.

3) With indifference: both countries have a new leader; the North’s is testing the South’s, using threats as a negotiating tactic to gain concessions on aid.

Today, someone slipped a marketing flyer under the door of his corporate apartment: Tour the DMZ for just 40,000 won!

I suppose I’d still be worried if I hadn’t witnessed the “crisis” myself.

Two years ago, we were both in Seoul when North Korea, after announcing a plan to increase its nuclear arsenal, sank a South Korean military ship, the Cheonan. A few days later, they’d shelled a fishing village, killing two South Korean soldiers and injuring civilians. The U.S. was sending out Richardson. Things were getting dicey, the New York Times assured me every hour as I checked the news online. It had been the top story for weeks.

My husband went to a business dinner that night—one of those men only events involving soju and moving food.

I went down to the lobby bar for a drink. 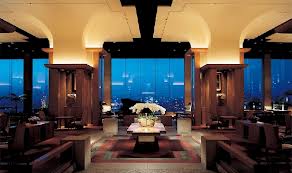 The lounge was an expansive space filled with plush chairs and candle lit tables. There was a stage set up before a wall of three story windows that looked out onto a faint mountain’s silhouette, on the other side the DMZ. If people were worried about the rising tensions with the North it wasn’t apparent here. The vibe was relaxed, festive, the holiday season approaching. A live band played soft, jazzy renditions of American pop songs mixed with Christmas cheer. I squeezed into the only empty stool at the bar, between two Korean men, and ordered a martini. I sipped and took in the clientele, mostly Korean businessmen or rich Japanese tourists, some middle-aged Asian women decked in jewels and fur, older men adorned by gorgeous young mistresses. It was a Hyatt, but few Americans actually stayed here. If and when they did visit, they stayed near the Army PX where the soldiers were.

Everyone was chain smoking. I watched the guy next to me light one cigarette after the other for an hour straight. He was a plume of smoke and ash and I thought, in a moment of secret relish—I’m not in America anymore. I’m away from the hyperbole. I’m on the inside looking out. You have to live it to believe it. Which I did the next day. I was getting ready to head off to an appointment when a faint, high-pitched alarm pierced through the walls of my room and my central nervous system. I froze, listening, waiting for it to stop. I couldn’t tell where it was emanating from, everywhere it seemed. I went to the window just as a pair of military jets flew by so close that the panes shook. I stumbled backwards, startled, my heart beating fast, the alarm coming from within me now. I looked out again, this time with a keener sense, for while the view was the same—gray, hazy, grim—something felt entirely different. 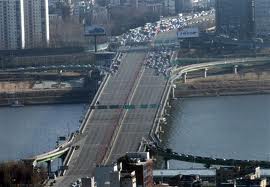 The Hannam Bridge, that’s what was different. Normally there was a slew of cars on that bridge—traffic in Seoul was preposterous at all hours—but in this moment the bridge was empty, wiped clean, a ghost of its former traffic-laden self. A faint voice came over the loudspeakers, spouting what sounded like instructions, in Korean. I waited for the English translation, which didn’t come. Some faint notion inside me said: evacuate; go to lobby. But I couldn’t move; my body felt like lead and I collapsed onto the bed.

At some point the alarm stopped, but I was already asleep.

When I awoke, I switched on the TV for news and ended up staring aimlessly at a Korean soap opera. There was this distant idea in my mind that I should be alarmed by my lack of alarm.

My husband called to ask how the appointment went.

I’d forgotten about the appointment.

The alarm, I’d blurted out suddenly, feigning concern. What was that? I was afraid to go anywhere.

Oh that, he responded dully, his tone full of irony. He had been at the client’s office when it had happened. A drill. His Korean friend had explained to him, with some indifference he noted; for these drills happen all the time. And the threats? What does he think about the threats from the North? They’re used to those, too, he shrugged. It’s the top story in the U.S., I reminded him. They say we’re on the brink of war. Even my dad e-mailed me to find out if I was okay.

The U.S. likes to blow things up, was his response.