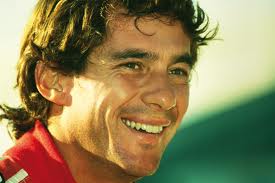 A three-time Formula One racecar champion from Brazil by the age of thirty-one, Senna is a legend, and this documentary is gripping. I’m not sure if it’s Senna’s handsome looks that grabbed me, the liquid brown eyes of his determination, or his singular belief in God and himself—he has been given this gift, there is a reason he’s been put on this earth, and driving fast is it. Fearless but intensely human; he openly admits to being afraid of getting hurt, of the possible fate awaiting his kind. But he has put himself in the hands of God…and, well, he’s rather lovely like this. For half the film you are literally in the car with him racing at top speed. All of the footage is real, beginning with a Super 8 video of Senna racing a go-kart as a kid, the reel grainy and raw and very fitting with a time when the sport was at its purest, the days Senna would much later long for, after technology, politics, and money take over and leave little room for the kind of talent and skill Senna so uniquely possessed. So went the thrill for Senna, the fun, and then the tragedy, for Senna’s fate came early, at the age of thirty-four when he crashed his car into a wall at the San Marino Grand Prix and the world went silent. 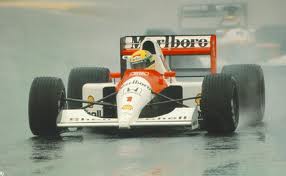 My husband and I took our nephews go-karting once, at some track in the desert where we’d been living at the time. Arizona to be exact, the kind of place where signs need to be posted at school entrances to remind parents to leave their guns at home…a place where laws tend to ignore safety, and so this was a pretty raw track, not the professional level by any means, but they had real carts with real speed and few rules. I drove with my six-year old nephew strapped into the seat next to me, my husband drove with the eight-year old strapped in next to him, and ready, set, go, we were off. For me there is only one strategy, one instinct that comes to me with these things, the same I use when racing cars at the video arcade: pedal to metal, don’t let up, no time for fear or second guesses, win at all costs. This was the first time my husband had faced this side of me, I believe, he, an Italian, home of the Ferrari and Formula One, the best drivers in the world… He had no idea, and his face looked confused as I whipped around him on the track, expertly, seamlessly in and out of the other karts, my nephew full of wild laughter beside me. I think we may have even lapped him, and I’m not sure my sister was too pleased as she watched from the sidelines. After it was over we ran and got right back in line to go again, this time the eight-year old begging to drive with me. Same thing happens at the arcade. It’s weird, but I always win; it’s a skill I seem to have. Even my husband sits there afterwards, dejected, scratching his head.