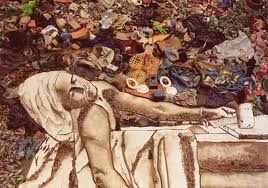 My writing often starts with garbage. It’s not uncommon for me to go back and, after reading what I’ve written, want to throw up, literally, from the stench. And though I might recoil, I don’t hit the delete key. I take the garbage and I study it. I sift through it and cull pieces I can use. I rearrange those pieces; I rework them until they weave a story, frame a picture, or make some kind of melody, until the garbage is no longer garbage but a creation, a piece of art. I recycle my writing, in essence, along with my bottles, plastic, and paper.

This is the idea that struck me as I finished watching the documentary, Wasteland. Vic Muniz, a renowned contemporary artist working in New York, returns to his native country Brazil with the desire to give back to the people who gave him his beginning. His vision is unclear to us at first. We are in Rio de Janeiro’s largest garbage dump, scavenging around knee deep in refuse with Vic and his cameraman as they attempt to get to know the catadores, the pickers of recyclable materials. 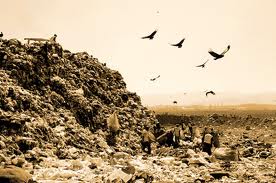 There are hundreds if not thousands of them, an entire community born to live and breathe garbage, down to the shampoo and soap they use to wash, the odds and ends they collect to make homes for themselves. “At least I’m not out on the street,” says one rather beautiful young woman. “I may smell, but I go home and take a shower and I don’t smell any more.”

These people are not ashamed.

Vic becomes drawn to five of these pickers. One by one, via his gentle, calming influence, he engages them in his art (still so elusive), he becomes their confidant, their friend. “Does art matter?” he asks one of them at the beginning of the film. The catadore laughs. The question is irrelevant. Though this won’t be the case by the end of the film. Slowly, as the film progresses, as the art unfolds, something begins to happen to the catadores, and to Vic. 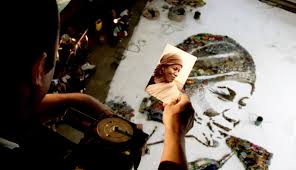 It’s not until halfway through the film that photos are taken, Vic carefully positioning each catadore in a pose, an expression of his or herself. The photos are then blown up to massive proportions, all the while the catadores collect their recyclables, and art unfolds before our eyes in the most unexpected way. I don’t think Vic expected to open the minds of these people the way that he does, for their minds do come alive with possibilities that weren’t there before. Closed-minded others (like me) might worry about what may happen after Vic leaves, their lives returning to normal, the way they were before Vic arrived. How terribly sad? No, Vic maintains. We open the minds of others, why not these people? 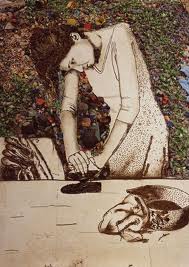 Artists like Vic are unique. They carry with them this sense of peace. Their vision is clear and their path seems predestined, however unknown and unexpected, for who could have foreseen what Vic would create here in Wasteland, and with only recyclable material. It’s unveiled at the film’s end—his art in the form of these five individuals. They are the art, their own creation, and I won’t spoil the surprise to say more than that it’s breathtaking. Emblazoned on the mind.