A British couple, played by Ingrid Bergman and George Sanders, drive to Naples to deal with an inheritance. The timing is post war. The film is black and white. The mood is grey. On the car ride, a rare interlude alone together, they realize that after eight years of marriage they have little to say to each other.

You never understand the love that was once there, if it was ever there. He is a sardonic-witted businessman, she a cold, empty spirit—“Our marriage wouldn’t have failed if we’d had a child,” she says. “You didn’t want a child,” he says. 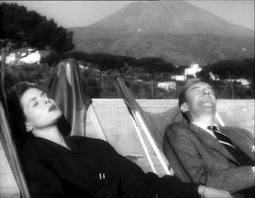 Roberto Rossellini, the writer/director is a neo-realist. As his daughter, the model/actress Isabella Rossellini, describes her father’s style, his movies are not driven by plot or narrative, rather, he starts with a reality and explores that reality through tunnels of darkness and blinding light. A man after my own heart. Bergman’s too, apparently. She wrote Rossellini a letter after seeing Open City, and asked if he’d consider her for one of his films. He wrote Stromboli for her, and they fell in love while making it. A scandal (at least in America), as they each had to end their existing marriages.

One gets the idea watching this film—part of a digital restoration project going on at the Film Forum—that the reality he began with for Voyage to Italy was the reality of his marriage to Bergman. By the time this film was made, their marriage was disintegrating, and you get the feeling watching Bergman that she’s not acting. Embitterment exudes in her every scene, as does Roberto Rossellini—a harsh reflection in her eyes. It’s this hardened emotion, her frostiness towards her husband that makes her very un-Bergman-like, unattractive—real, like the rest of us.

Naples has a moody, barren feeling. The dead souls of Pompeii. The smoldering baths of Vesuvius. The museum of archeology. Skulls, ruins, and death, or pregnant women, mothers, and children. Bergman wanders around these opposing forces lost in thoughts of her crumbling marriage and of a poet who once loved her. Her husband has gone to Capri after a fight. She despises him, she mumbles, driving into town. Her facial expressions are so thorny and bitter it’s awkward to watch. At one point, the couple is witness to the excavation of skeletons of a man and woman caught by the lava in their lovemaking. Forever entwined. Bergman breaks down.

It’s no wonder she and Rossellini divorced ultimately, though the couple in the film is saved, in the end, by what could be no less than a miracle. Unreal? Perhaps. But that’s probably the message the director was after. It would take a miracle to save them, or any marriage in ruin.