To what length have you gone to see a movie, any movie? 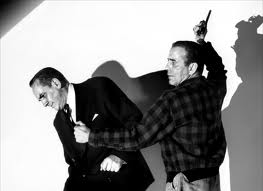 A nephew, home from school, sick, bored, in need of a movie companion, sat with his laptop next to him on the couch, positioned it to face the TV, and, with me on Skype video from New York, we watched The Three Musketeers together. An hour and forty minutes later I was left staring at a blank Word document, my writing for the day.

Traveling in Berlin, alone, exhausted but not wanting to return to my dreary budget hotel room, I sought out a theater and watched Sea of Love dubbed in German with no subtitles. A few weeks later back in the U.S., I saw it in English. It was never the same.

After a nephew’s swim practice, poolside, waiting for our ride in sweltering humidity, he and I watched The A-Team on his I-touch sharing earplugs, the right in his ear, and the left in mine. Two hours like this and I had a serious neck ache, not to mention sunburn.

My sister and I were on a cross-country plane ride, so desperate for a distraction from the tragedy we were about to face, that we watched Martha Marcy May Marlene, which was depressing not because the story was depressing, which it was, it was depressing because it was just a bad movie. I kept trying to turn if off, or change the channel, but I’d seen everything else, and it was simply not possible for me to read, or stare into the blank screen, thinking of what awaited us on our arrival.

If you have anything to share, please do so. I will compile the submissions and include them in an anthology called, “Desperate times call for desperate measures.”