To Rome, but where’s the love? 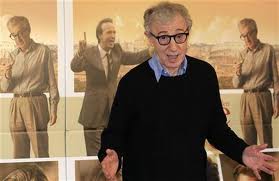 I’m a Woody Allen fan who happened to be in Rome, where Woody had already released his latest movie, and so I thought, why not? I know a little Italian. It will be good practice. Plus, I’ve been coming to Italy for almost eighteen years and I’d still never been to a movie theater. So, after promising not to badger my husband with requests for translations, one evening we took a pleasant stroll across the Tiber to Piazza Cavour, to a megaplex tucked inside an ancient structure. Inside, it was exactly the same as an American megaplex, only they don’t put ice in the coke and all the movies (mostly delayed releases of popular American films) are dubbed in Italian, no subtitles.

I was surprised to find myself understanding much of what was transpiring in To Rome, With Love; I was catching a good amount of the dialogue where I normally have difficulty understanding much of what my husband’s family says outside of meals, conversations usually limited to food, soccer, and what we’ll be eating for the next meal, and even after having taken many Italian language lessons.

So I knew, right away, that for me to understand Woody’s film, in Italian, that there was very little complexity in the story, that the characters were stereotypical and flat, the plot ordinary, and the relationships unrealistic. There were four or five parallel stories, including a predictable love triangle for the Americans, part one the absolutely-devoid-of-originality-cross-cultural couple who meet-on-the-streets-of-Rome-and-fall-in-love, she American, he Italian (and a Communist!), part two her American parents arrive and meet the Italian family. Another story was about an ordinary Italian office worker who must deal with sudden fame (happens all the time in Italy…); and to top it all off was a story of repressed Italian newlyweds who arrive in the Big City and are taught lessons in passion by a whore, a prostitute, and a thief. My husband’s Roman cousin, who is a fan of Woody Allen, was not impressed, nor were other locals, disappointed by Woody’s portrayal of Italians, and the six euros they wasted on the film. 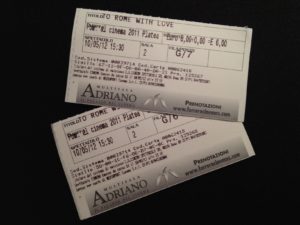 The character Woody plays, an elderly American struggling with life’s purpose after recently retiring from the music industry, is essentially Woody playing himself, and as I watched I got the idea that he made this movie, however heart felt his intentions, in order to fight his own obscurity, or perhaps more simply (and sadly) to entertain himself.

An ode to Rome, like Midnight in Paris was to Paris, and in so many ways, yes, this is how it feels to wander around the cobbled streets of the Eternal City. But streets are one thing, the people another. It’s easy to stereotype Italians, we all do it (see paragraph two), and Woody has done it too, maybe because he can’t get deep into the Italian soul, like he has done (so well) with his American protagonists in other films, Hannah and her Sisters for one, Crimes and Misdemeanors another.

Maybe I am being biased, defensive of my husband’s cousin, who descends from many generations of Romans, who, with his own software business, struggles within the confines of his government’s corruption and dysfunction to build a future for his wife and three boys. The movie rubbed me the wrong way. The dubbing might have been an issue. Watching Woody dubbed is like me trying to communicate in a foreign language, the essence of myself is gone. I prefer Woody when he portrays complexity and chaos, contrasts of light and dark, films like Annie Hall and Manhattan. His ironic, self-deprecating intonation, his one-of-a-kind take on the human condition, his wry intellect were absent in this film. Replaced, instead, by an old and frail man.

Perhaps I should have waited to see it in English.