This Is Not A Film 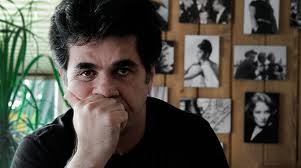 Jafar Panahi, a famous Iranian director banned from making films for twenty years and facing a six-year prison sentence, is under house arrest in Tehran while his verdict is on appeal. Frustrated, bored, depressed, he picks up a video camera and starts taping himself. First, breakfast; second, a phone call to his friend (who arrives with another camera and takes over the videoing); third, feed the iguana; fourth, water the plants; fifth, attempt to “tell” the script of the movie he was banned from making; sixth, decide it’s impossible and give up; seventh, use your iPhone to video tape the guy video taping you…I got claustrophobic just watching Panahi try to do something he loves without doing it (make a film), and there was no need to feel claustrophobic as I was in a theater with barely anybody in it! Who would go see this film? The bored, caged, and disillusioned?

Or someone simply desperate to see a film, any film. What if movies had been banned in your country, except for this film, for instance, because it’s not a film. You’d go see it, wouldn’t you? (Especially knowing that Panahi had to smuggle it out of Iran on a USB drive hidden inside a cake on its way to France.) Or maybe you’re someone who blindly follows certain film critics’ recommendations…someone who has difficultly forming their own opinions…

I don’t have an opinion about this film because it’s not a film. But If I were forced to form an opinion I’d say that it is a film. Just like I’m a film. We are all films, aren’t we? In fact, I’m still waiting for the climax of my film to take place, not to mention the denouement, resolution, and that oh so coveted redemption… I’ll wait forever, no doubt, because denouement, resolution, and redemption don’t happen in real life.

So then I am back to: I am not a film. This is not a film. What this is is an act of desperation. At one point, Panahi starts filming the trash collector, a long, drawn out sequence where he follows him into the elevator with his camera, filming as he makes his way down to each floor (of which there are eight and we stop on all eight), all the while probing in a friendly, persistent, slightly frantic manner about this young, rather handsome man’s life. Panahi follows him all the way out of the building, stopping just short of the gate, lest he be at risk of being caught “making a film.” A demonstration in the adjacent streets, fireworks, ratatattating of guns, rioting, or this is what it seems like from the vantage point we see through Panahi’s camera—a small explosion, fire, and then the non-film ends. And we all go back to our cages.