The tomato, a dumpling, and the Aztec Indian

Korea is thick with a gray that hovers, ever present, like the stench of garlic and summer. It can be oppressive. Which is why one must stay focused. One must do whatever it is one came here to do. There must be some reason you are here. Work, war, a spouse; to hide, disappear. But not escape. Korea is no escape. Thailand is an escape.

The food. It’s worth being here for the food. That could be why we are here.

Steaming fresh, melt in your mouth, hand made thirty seconds ago by the same woman who just served them to you with one hand over her mouth, suppressing a giggle. She, the Korean lady, always giggles…at us, the only white people in the restaurant, a nondescript place off some thoroughfare in Gangnam. 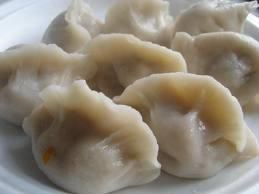 “Who doesn’t like dumplings?” he says, as one slips from the hold of my chopsticks and lands between us on table. He barely notices, so enraptured is he by the flavors. Enough to withstand the ache of his cross-legged floor position. Enough to rouse a gleam is in his eye. Seventeen years, I know what he will say next.

“Yes, agnolotti,” I pretend to agree. It always comes back to agnolotti.

“Dumplings, agnolotti, dough folded up with a filling, every country has its version.”

China’s got the wonton.

Yes, but who started it?

Asia. Italy got its pasta from Asia.

That’s big of you to admit, I say, glancing around. The restaurant came recommended. Written on a piece of paper: 꽃돼지 연탄구이 (서귀포시 대포동. We walked up and down the street trying to match the letters. It looks like a hat, he’d said, about the first one. Over there I’d said. This went on for a time. I should learn the Korean alphabet, he’d said, deflated, sometime later. Yes, I’d said, you should.

Neon lit. All those tiny bowls filled with pickled, unfamiliar vegetables. Perhaps it is the unmoving swelter, the oppressive gray, week four of kimchi and garlic, or the second Cass beer, but he goes on to admit that Italy’s signature dish, one he has prided over since the day I met him, spaghetti al pomodoro, has roots outside Italy.

That’s what I said.

As we’ve already established, he says, the pasta came from Asia, but the tomato, well…he hesitates. Its origins can be traced back to the early Aztecs; so it’s believed to be native to the Americas.

At last, a contribution to the great God of food.

Italians only discovered it when they were exploring the new land. They took the seeds back.

That’s big of you to admit, I say.

But it’s the Italians that mixed the noodles from Asia and the tomatoes from America and created spaghetti al pomodoro.

Don’t forget the Renaissance, he says. We are inventors, after all.

He unpretzles his legs, slowly, achingly, and I watch him, thinking not about the tomato, the dumpling, or the rebirth, but that finally, after thirteen years, my yoga has paid off. I may not be Zen, or enlightened, but I can sit for hours at a traditional Korean table and not suffer.