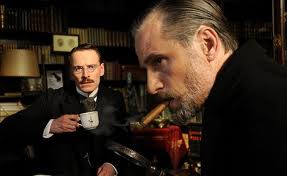 I’m going to show my ignorance here. I woke up this morning with the question, what actually was the “dangerous method” in the film “The Dangerous Method?” When I’d heard about the movie last year, some vague rumblings of it being dark, perhaps disturbing, that it involved a deranged woman who undergoes some kind of therapy involving Freud and another doctor. I was thinking of strange, secret experiments involving machines and contraptions.

But there was none of that. Only a doctor seated behind his patient, a hysterical, libido raging woman, encouraging her to talk about the source of her disorder; he asks questions, observes, and takes notes. The dangerous method is simply Freud’s “talking cure.”

Daring and experimental at the time, now it is something I take for granted. It’s so intuitive, logical, at least for me, but then that’s probably because my father was a therapist. Talking about our feelings was the normal course of nature in our household. No trauma went unsolved if one expressed themselves. In theory anyway.

The film is a true story, one that examines the intricate relations between and among Freud (Viggo Mortensen), Jung (Michael Fassbender), and Sabina (Keira Knightly). Freud, the master of psychoanalysis, Jung his star disciple, Sabina, Jung’s patient, whom, once she is cured (sort of), goes on to make significant contributions to Freud’s work. But only after she’s helped Jung, married to an aristocratic, saintly wife who keeps bearing him children, succumb to repressed desires.

Do we repress our desires or unleash them? Here’s that question again. Vincent Cassel is a playful, mischievous Otto, a fellow Freud disciple and the austere Jung’s alter ego: “If there’s one thing I’ve learned in my short life, it’s not to repress anything.” (He dies, later, of starvation.)

The film is all very upright and proper…until it isn’t; at its core it’s a horror movie. David Cronenberg did, after all, direct “The Fly,” “Dead Ringers,” and “Scanners.” The twisted, jerking howls of Keira Knightly throughout the first ten minutes of the film made me want to turn it off. It felt like overacting. “She’s bugging me,” I turned to my husband. “She’s disturbed. She’s supposed to bug you,” he said. Then I found out why she was disturbed and was hooked, guiltily, like Freud was hooked perhaps, for sex is intriguing, and one can’t help but have a perverse curiosity, especially in Freud’s world, where sexual desires are at the core of everything.