The secret in the cupboard 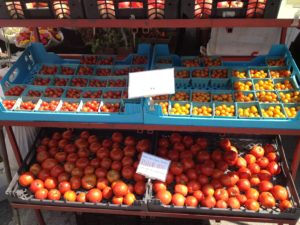 When my husband and I usually make pasta sauce, we use canned, San Marzano tomatoes. Olive oil, garlic, and hot peppers; ground pork and beef with sautéed onions; olives, anchovies and capers—whatever type of sauce it is, the simmering tomatoes never fail to calm my soul. But in our kitchen up on the fourth shelf of a high cupboard that only my husband can reach are the coveted jars of pureed tomatoes preserved from last season. He began preserving four years ago, and my first question to him was: Why?

It took only one finger taste of the puree to understand why. Now I’m the tomato preserver’s biggest fan.

One night, my mother and sister both happened to be in Manhattan at the same time for work, a rare occasion for which my husband was out of town (coincidence or not). It was late by the time they’d returned from their respective events. No one had eaten, and so I offered to make a simple pasta dish. The simple part being those coveted tomatoes. I climbed up on the kitchen counter, having to stand on it to reach the fourth shelf and dig all the way in the back, something I did quietly and while my guests were changing. I only had to heat up the tomatoes in a pan, mix them in with the pasta, drizzle on olive oil and a pinch of salt. The flavors in fresh pureed tomatoes are so stark and luscious and potent that you really don’t want to ruin them with other ingredients. Even a novice couldn’t miss the difference from canned tomatoes, and, as predicted, they raved.

“He jars them every season,” I said with no small amount of pride, for these hard-working women and I shared a heritage of eating from cans and boxes with factory printed labels. And while they looked at me like I was nuts, I saw envy in their eyes. 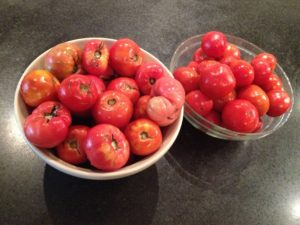 Preserving is no small effort, but worth every laborious moment. It starts with a trek to Keith’s, our favorite organic farmer at the Green Market on Union Square. His tomatoes are expensive, but for cooking you can go for the cheaper “seconds.” They don’t look so great, but it doesn’t matter, the key is in the ripeness. A rolling suitcase might be in order. Some embarrassment when people see what you’re doing. Don’t you have anything better to do with your ENTIRE Saturday? No.

Twenty pounds is all we can manage with our pot situation. Three hours later the entire house smells like a tomato. I smell like a tomato. No showers until after the sieving process, we’ve finally figured out, for reasons that don’t become obvious until you actually pour the cooked tomatoes into the food mill, start churning and a splotch of tomato hits you in the forehead. “It’s cleansing,” I tell him. This is my favorite part of the process. Churning the tomatoes through the mill, leaving behind the seeds and skin, letting forth only what’s pure, good, and right. “You feel better?” he says, after I’ve processed the last batch, and I do. 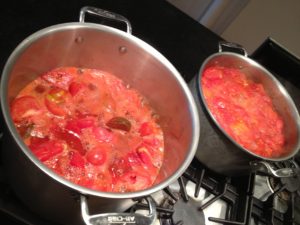 We continue cooking the puree until most of the water has evaporated. He funnels what’s left (an amount so unfairly miniscule given the volumes of tomatoes we started with) into sterilized jars, twists the lids tightly, and we wait for nature to take its course, the natural sealing process. “Physics.”. I’m not allowed to touch or look at the jars while this is going on, for fear that the lid won’t seal properly. Then, once cooled, up in the cupboard they go.

When he got home from his trip, my mother and sister long gone, I was excited to tell him that I’d used his tomatoes in the pasta I’d cooked for them. There was momentary silence, then: “You what!” He hurried over to the cupboard to count the jars. One was missing. I bit my lips to keep from smiling because I’d anticipated this.

“You used my tomatoes on your mother and sister!”

“Whom else would I use them on but the people I love most?!”

He gave this some thought. 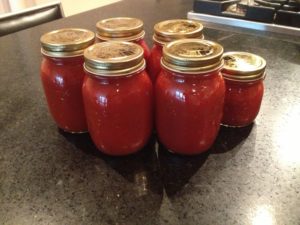 I did have a point. But still, he didn’t seem so sure.

In Italy, from what I’ve observed, there’s the food, and then there’s the real food. The rose petal grappa a friend made in their garage, the wine with no label pulled up from some crevice in the earth, the hunk of reggiano cheese from the farmer cousin in Parma hidden in some cellar, unspoken treats brought out only after the guests have gone. Have I been good? Am I worthy? Often these are things I only hear about later.