The Only American in Italy 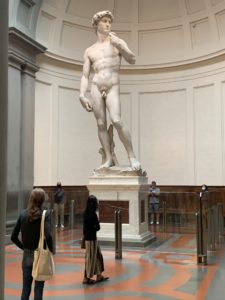 I told myself I wasn’t going to write or post any photos about my trip to Italy. Who would want to hear about it? Who would want to scroll through their Instagram and come upon a picture of my minuscule being standing, practically alone, before Michelangelo’s colossal statue of David, in the Academia in Florence, while they themselves are imprisoned in their respective cities and suburbs, as they have been for the past six months?

Thank god they don’t allow photos in the Sistine Chapel, because no one wants to see a picture of me with my mouth hanging open staring stupefied up at one of the world’s most divine frescos, barely twenty or so people around me. Italians, mostly. A few Germans. But no “tourists” in the traditional sense. Americans, in other words, no offense to the Americans in the room. I’m American, though while in Italy my husband insisted I pretend otherwise. The only reason I was there was because I’m married to him, or his Italian passport, so he likes to joke.

I took photos everywhere I went but sent them to no one. No one needs to know that I breezed right into the Vatican and through its halls unhindered by strategy or agenda, those we meticulously devise in order to avoid crowds, claustrophobia, or asphyxiation. In fact, all the windows had been cast open so that the air could circulate, my only company the most pleasant of breezes. And Raphael, of course, Leonardo, Titian, Michelangelo. You know, those guys.

On another day, at the Capitoline Museum, I stood staring at Caravaggio’s famous painting, Boy Bitten by a Lizard, in a small room built for only this painting. I kept having the phantom sense of people hovering behind me, closing in, but each time I looked there was no one. It was late in the day. As I left, the sun was setting over the dome of St. Peter’s Basilica. Two days ago, I had climbed up that dome to watch the sun rise. 500 narrow, circular steps to reach the very top of the copula, where I stumbled out onto the outer rim, lightheaded and enthralled, the entirety of Rome spinning before me. Not one soul did I pass on my up those 500 steps, or back down again, but for Christ and eleven of his apostles.

This too became a slew of pictures I sent to no one. 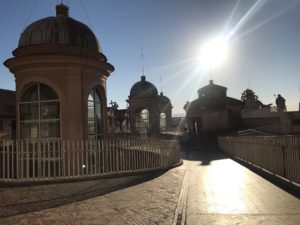 Entering the Basilica on the ground floor, I followed in two nuns who immediately soared off into the vast space of worship, leaving me alone and feeling at once inanimate. Everything around me, all the ornate marble and gilding and bass relief, appeared watery and incandescent. I tiptoed silently by priests murmuring morning prayers in candlelit side-chapels, trying to remain invisible while never feeling so visible in my life. So seen, even though their backs were to me. I am not religious, but I might have become so in that moment, when, by Bernini’s High Altar, I came upon the only other unrobed person, on her knees on the floor praying.

Two days later, on the anniversary of 9/11, I found myself roaming through the Roman Ruins, serendipitously. I’d not planned to visit the Forum as a pilgrimage to the two ruinous craters back home that were once the Twin Towers, but that’s what it felt like, the only vision that stayed with me. 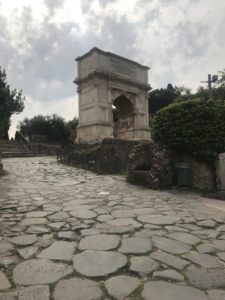 To get to the entrance of the Forum, you parade a mile from the Capitoline Hill to the Colosseum. Normally this path along the Forum is clogged with tourists, and men dressed as gladiators peddling tours or photo ops. But on this day there was only the lone street performer, a scruffy grey-haired man fronting that song from the 80s, Magic, you can do anything, that you desire, Magic…, while his grey-haired cohort shimmied and shifted around on the sidewalk beside him. Something about the playfulness of the tune, the hopeful lyrics, the Arch of Titus looming in the background. Normally I’d rush by, pushing past tourists to avoid the scene, but today I slowed my pace, humming along under my mask as the melody floated out over the ash and ruin, like magic dust, making everything breezy and light.

FOMO torture, I had vowed not to do this. Alas, I have succumbed. I’d been staring at a blank page for far too long upon my return to New York City. RBG had passed, the drive for change was blaring, and yet Italy kept presenting itself. Visceral moments, that’s what the essence of my writing always comes down to, and that’s what each one of those moments I experienced in Italy were, otherworldly, but laced with something dark, sad, and ominous. Italy needs their tourists. And we all need Italy.