The Not So Inconsequential 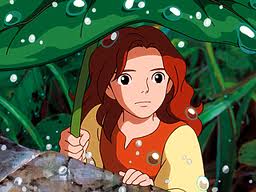 Did you know that tiny people live underneath our houses? That they’ve made little lives for themselves inside the nooks and crevices of our support structures? To survive, these “borrowers” as they are called, venture into our kitchens every so often to take the things they might need, inconsequential things to serve their inconsequential lives, a sugar cube, for instance, might last for a month.

According to rumor, the existence of borrowers goes back for centuries, though there’s speculation that their population has grown mostly extinct. Arrietty, a doe-eyed, amber haired girl and her parents might be the only borrowers left, and they often debate the fate of their kind. It leaves for a rather lonely existence, one in which Arrietty spends her days voyaging through the blades of towering grass or scaling mountains of twig and pebble, fending off the grasshoppers, lady bugs, and other insects her size, a wild forest filled with dangerous creatures. The house cat is a gargantuan stalker; human “beans” are the face of death.

When my nine-year old niece suggested we see “The Secret World of Arrietty,” all I knew was that it was an animated film, and, as such, I prepared myself for a chaotic, kaleidoscope of Pixar characters engaged in bombarding me with heartrending, life-affirming messages and a very tried ironic wit. In other words, I was prepared for a nice sleep. It wasn’t but a few minutes into the movie that I knew that I was experiencing something different. There was a gentle somberness to the film, a slow moving quiet that snuck up on me, and when my stepmother leaned in and told me that it was Japanese my reaction was…well, of course.

In Arrietty’s world the littlest things mean everything. A found pin is a sword; a teapot becomes a means of escape down a stream in a long and hard voyage that lands them, presumably, a few yards down the countryside. The banal tasks of daily life are in fact colossal journeys, like scaling a kitchen cupboard to reach a bowl of sugar cubes. In this world, inconsequential is not so inconsequential, after all.

12 million people saw the film when it opened in Japan. In Long Beach, California, my stepmother, niece, and I were the only people in the theater, to the great delight of my niece. At one point in the middle of the movie, she turned and looked at me with wild abandon and I nodded, yes, of course, without her having to tell me what she was going to do, for I had the urge to do the same thing; and would have, had the presence of my stepmother—a wonderful, elegant lady—not kept me poised in my seat while my niece jumped up from hers in order to twirl and leap down the isle to the screen before us, where she proceeded to dance from one end to the other, over and over, her arms outstretched, as if to let Arrietty know that she wasn’t alone, that there were more of us still out there.