The screen went black unexpectedly. I stared at it for a confused moment, then got up and left the theater because it occurred to me that the film was over.

I felt someone on my heels. “What did you think of that movie?” A woman overtook me in the lobby demanding to know. Her face was full of desperation, and I had to bite my lip to keep from smiling. “I think it was what it was,” I offered uselessly. “It was torturous,” she gasped back. I flashed her a commiserating look and left. I had liked the movie, or thought I did. I was still contemplating it.

In Julia Loktev’s new film, The Loneliest Planet, a young couple goes on an extended trek through the Caucasus Mountains in Georgia before their upcoming marriage. It’s apparent that Nica (Hani Fursteberg) and Alex (Gael Garcia Bernal) have trekked together before. We immediately feel their intimacy. The pace of the film leaves little else for us to feel as we essentially spend our one hour and fifty-four minutes walking beside them. Up the graveled hillsides, through the plains and valleys, across the rivers and streams. Little is said, the music is the sound of the wind in the grass and the stones crunching under foot, the murmur of their voices. Their closeness is experienced sensually, by the way they walk together—in their own thoughts or each others’—look at each other, interact with their guide (a wonderful Bidzina Gujabidze), the slow laborious ascensions. Laugh. It is obvious they are in love. A great and true and meaningful love. 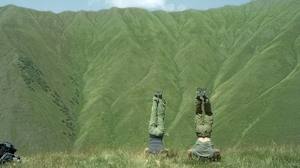 But then a shift occurs. Midway through the film something happens to them, and it’s as subtle as it is powerful, a small crack in their bind that feels as if the world were breaking open. We walk beside their silences now, their distance, pain. We follow them into themselves, where they search for forgiveness, understanding. Will they make it back?

It’s as if the majestic surroundings are swallowing them up, the vastness dwarfing them. Often they appear like ants inching their way along a spectacular mountainside. Watching Nica, Alex, and their guide trek onward, beings connected but ultimately disparate, I began to sense the film unveiling some kind of mystique. It’s not the world’s vastness that dwarfs us but our own souls. The world is not the loneliest planet, we are, each of us.