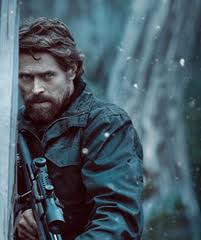 The Tasmanian Tiger (Thylacinus cynocephalus) is an extinct wolf-like marsupial, with black and brown stripes across its back giving it a hint of a tiger. My first reaction upon sight of the animal was one of revulsion.

They are shy, secretive, and quietly nervous, I read, and that when hunted they usually gave up without a struggle. We are privy to some old moving images of Tigers, the last ones in captivity, from the thirties, as well as from crayon drawings by the boy character in the film. His father, a “greenie”, as we are first led to believe, has mysteriously disappeared.

Sightings have kept the Tiger’s ghost alive to this day. Its home is the island of Tasmania, off the coast of southern Australia. Willem Dafoe, in The Hunter, a film based on the novel by Julia Leigh, is hired by a shady biotech corporation to track down the creature and return with specimens that will enable the commercial development of an anesthetic, one the Tiger secretes naturally, used to stun its prey. Dafoe the mercenary, his face deeply carved and etched, his eyes wide and searching, adapts easily to the mysteriousness of this lost land, the Australian highlands, with a rifle, traps, the requisite outback survival gear and his own ingenuity.

The cinematography is gorgeously shot. The moody, misty violet terrain reminded me, oddly, of the TV series Lost in Space. Although Tasmania is not an alien planet, it may as well be. To be there is to have all senses at once heightened, for what strange creature might be lurking behind the next crevice or corner. In Lost in Space, the Robinson family left an overpopulated earth in the hopes of colonizing the planet Alpha Centauri. The Robinsons, in essence, were searching for a way to extend the life of the human species; any threatened species, for that matter, humans feel compelled to save because it brings them hope. 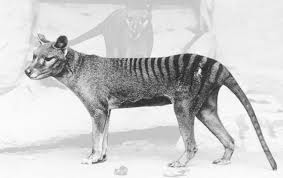 The Hunter, however, is an entirely different beast. He exists at a primal, animalistic level. At one point in the film Dafoe’s character describes the animal he is hunting: He’s the last of his kind, all he does is move from cave to cave, hunting and eating and waiting to die. It is a moment of reckoning, for he has seen unto himself.

Certainly, one imagines that The Hunter will save his own kind from this fate, but how he does this is open to interpretation, something the film does beautifully. Do we harness the past to satisfy the needs of our modernist and competitive future? Or do we leave the past alone, don’t try to resurrect it, make do with what we have, lest there be terrible consequences…