“The hardest thing is to do something which is close to nothing.” 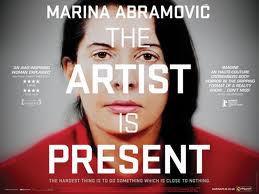 I’m no high art aficionado. At museums I tend to fall in line with crowd pleasers like Picasso, Cezanne, Monet, Miro’, Caravaggio, Michelangelo…you know, those guys. When a performance art piece happens to be on display at a museum I am visiting, I tend to walk on by, perhaps staring blankly at a few of the grainy, pulsing videos, indifferent, unaffected. Inevitably someone will pose the question, “Is this really art?”

I detest that tedious question. You either like it or you don’t and if you don’t move on.

Two years ago my mother was visiting New York and as part of her stay I took her to the Museum of Modern Art (MoMA). I had neglected to do any research ahead of time, we had no plan or agenda. I enjoy meandering through the MoMA and often take out of town visitors there, usually starting the tour on the sixth floor and slowly filtering down through the various exhibits, looking forward to the serenity of the sculpture garden, and then, most importantly, lunch. 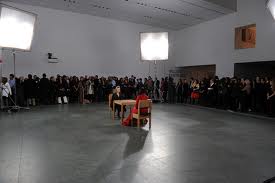 But as my mother and I ascended the steps that spill out onto the glorious second floor atrium, there she was, MARINA ABRAMOVIĆ, performing “The Artist is Present”. The MoMA was showcasing a retrospective of her work, and while the exhibit was on a higher floor, Marina was doing a special performance right there in front of us. I’d never heard of the rather controversial artist. At sixty-three, she is a tall, strong, striking woman, with a force of black braided, cascading hair. She was sitting on what seemed to be a very uncomfortable, hard wooden chair in the atrium’s roped-off “square of light,” engulfed in a sweeping red velvet dress. Across a simple square table sat another person, someone who seemed to have been pulled off the street. Still and silent, they were staring at each other. Exhilaration filled the air, a quiet murmuring as the audience milled around contemplating the sight as they might reflect on a master’s painting. Some observers were sitting, many stood confused, a few were crying.

I was about to scoot my mother up the escalator, but an invisible presence held us there. We asked a bystander what the spectacle was all about: for three months Marina would sit in that chair for however many hours the museum was open, and visitors were invited to sit across from her for as long they chose to, no talking, no touching, no overt communication of any kind. Why? might have been my first question, one that quickly became irrelevant as we began to circle the floor taking it in.

I was waiting for Marina to fidget or sigh, smile or cry. But none of this happened. What happened was in each participant’s expressions—joy, sorrow, grief, anger, hatred, fear, disbelief, confusion, love— as they stared into Marina’s eyes, some invisible kinetic energy was exchanged between artist and observer. 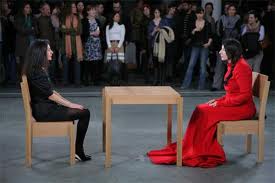 I’ll stand and observe a work of art that attracts me for maybe five minutes, at the most. But I could have studied this work of art all day. Every so often Marina’s face might change with the light, or her lips might curve the slightest bit, a sparkle might emit from her dense, black eyes.

Marina’s forty-year journey up to and during the course of this retrospective is charted in a moving, seductive documentary, Marina Abramovic, The Artist is Present. “It’s not about me any more,” Marina narrates, talking about the experience after the retrospective was over. “I’m just a mirror image of the person I sit across from.” Not only was there a serious physical toll involved for Marina but also a mental one, an endurance test that felt as heavy as life. “People have so much pain.”

I cannot imagine enduring what she observed in all those faces.