The first man to go mad 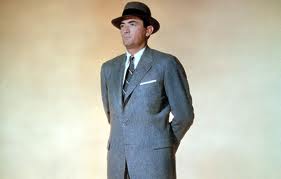 The Man in the Gray Flannel Suit (1956), Madmen this is not. A few martinis are consumed, in those tiny glasses the way they’re supposed to be consumed. Stirred not shaken. Some whiskey, doubles mostly, and Tom Rath, our troubled hero, like Don Draper, does work in advertising, or PR that is, commutes into Manhattan on the Metro-North, and does have an affair. Though Tom’s is limited to just the one, what took place ten years ago, in Rome, on the brink of D-day. A rather passionate love depicted in one of Tom’s flashbacks with an Italian woman named Maria, an affair in which Tom’s devoted yet pushy wife (Jennifer Jones), to whom he was married at the time, still has no knowledge of. The burden begins to weigh heavily as other present day pressures mount, as Tom struggles to climb up the corporate ladder, despite his indifference, in order to support his family in the manner his wife so desperately desires. The haunt of war memories abide. 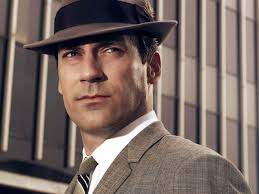 “’The most significant thing about me is…’ I want you to finish this question,” says Tom’s future employer, where he’s interviewing for a higher paying job. Tom goes into the other room, looks out the window, and contemplates the war. We are taken back to the moment where he accidentally kills his best friend with a grenade, and, refusing to believe the reality of his friend’s death, carries him for miles to a doctor who can confirm it. Tom returns to the employer a short, typed paragraph as to why he feels that what’s significant about him is irrelevant.

It is irrelevant, I’m guessing, because no one can understand but Tom the most significant thing about him. He is alone in this, just as Don is alone in his war. Just as all men are. “Marriage should be like a secret,” Tom’s wife says at one point, after the two have been arguing over all those desperately obtuse things: how they will “get ahead” without compromising their morals, why their marriage has never been the same after he’s returned from the war, why he’s changed, lost his guts, his drive. “A secret between two people that no one else can know about.” 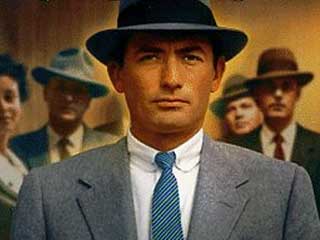 The movie is an adaption of Sloan Wilson’s novel, and is one of my favorite classics, an honest, tender, unfiltered, colorless Madmen look into the guts and core of the human condition and the beautiful calamity that is our lives: love and war, fear and death, boredom, endurance… that ever illusive forgiveness.

Both romantic and dark, Peck is at his best as the smolderingly introspective, morally fraught soul—the first Don; the first man to go mad; the first Mad Man.