So often people say to me that there are no good movies out. There’s nothing to see. But oh there is so much to see. A new must-see-film, for me anyway, is released every other day, it seems. All you have to do is be willing to read subtitles. “I’m too tired to read subtitles.” “I’m not in the mood for subtitles.” It’s really not that difficult. In fact, sometimes it’s even easier, especially if you’re hard of hearing or have difficulty catching all the dialogue. 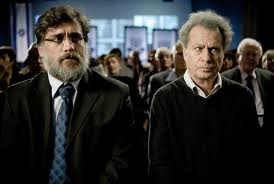 For instance, if I didn’t read subtitles, I would have missed Footnote by Joseph Cedar, a film I can’t imagine having missed. Have you heard of Footnote? Probably not, though if this were an American film, surely you would have. If this were an American film, we’d all be running out to see it. It was nominated for best foreign film at the Oscars this year, held in wide acclaim by critics, and yet for the average movie fan it remains inaccessible, obscure, a footnote.

The film is a character study of two men, Eliezer and Uriel, competing Talmudic scholars at Israel’s Hebrew University who also happen to be father and son. Eliezer, the grave and embittered elder, is known for his meticulous, all consuming research, while his gregarious middle-aging son is known for his broader reaching interpretations of the Talmud, those more accessible to modern society. The movie opens with a shot of Eliezer suffering silently in his seat as his son accepts yet another prestigious award for his work. Eliezer, for all his efforts, remains obscure but for one, single footnote in some long-dead mentor’s book. He is coarsely bitter about this, an emotion drawn out with superb subtlety by the actor, Shlomo Bar Aba. Eliezer is cold, curt, stoically inexpressive, and yet we know, we see it in the eyes, his demeanor, his obscurity is eating away at him, and his son’s success is eating away at him even more.

“It’s. Just. An. Award.” Uriel, with an affecting desperation, reminds his colleagues (and himself) after a situation gone wrong: his father is mistakenly awarded a prize meant for him. Praise, acclaim, recognition, at some level we all crave it. And if not for ourselves then for our children, those we raise to be what we couldn’t be, to have and do what we weren’t able to have and do. But do we, in the end, want them to have those things? To be living reminders of everything we are not? Can we truly live with that?

Eliezer can’t seem to. When a reporter comes to his home to interview him, one of the film’s most arresting scenes (and there are many), Eliezer, overwhelmed by a delight so deeply repressed, proceeds to describe his son, with an eerie joy, as a useless sellout. It’s an awful, biting scene to see this quietly dignified scholar become so full of himself, however cryptic, for the first time. His job as a researcher is to find the truth, he tells the reporter with a nervous, sweaty brow, the exact meaning behind every word; it might take years to interpret one sentence, but what he finds will be the truth. His son, however, takes not one word but all these words and jumbles them around until they suit some broader, self-purposed interpretation. This is not truth.

So what is the truth? And where does that truth play out among fathers and sons? The movie poses the question. Here’s my answer, dear father: Bitterness swallows you up.