Why is it that such a simple story, when told through the eyes of another culture, turns into something far deeper and meaningful to me personally?

A lunch box is delivered to the wrong man, triggering an exchange of hand written notes between two very lonely individuals. “Sometimes the wrong train can lead you to the right station.” This would sound cliché if it weren’t said on an over-crowded commuter train in Mumbai, standing room only, ever, the city so thick with grit and chaos and overcrowding that there are only vertical plots left in the cemeteries. “I’ve been standing all my life… trains, buses…” writes Saajan, a quietly introspective, borderline misanthrope widower who’s decided to retire after thirty-five years as a claims adjuster. “Now I’m going to have to stand in death.” It’s just one of the many uncharacteristically playful and intimate thoughts that Saajan, played by the sublime and unassuming Irrfan Khan (Life of Pi, The Namesake, In Treatment), writes to Ila, the housewife who’s lunchbox he’s come to have the unexpected pleasure of eating every day, if only by accident.

Or it starts out that way.

By the grace of some fluke in Mumbai’s otherwise flawlessly intricate delivery system of lunch boxes that wives cook and send off to their husbands at the office (armies of chanting men in white robes and worn sandals travel by trains, rickshaws, scooters, and foot loaded down with these precious boxes), Ila’s lunchbox gets mistakenly delivered to Saajan. “There is never a mistake, the delivery man tells Ila when she at last tries to explain the problem. “We never make a mistake. People from Harvard have come to study our system.”

One might wonder why the men don’t just take their lunchbox with them to work in the morning, as we do in the States, but this question is never posed, or answered. We’re not in the states. We’re in India, and how lovely it might be to be on the receiving or giving end of one of these mouthwatering displays of daily affection. Fresh, folded over naan, curry and ginger and chutney and chickpeas, though truthfully I had no idea what Saajan was eating most of the time, just that I wanted a taste of whatever spice laden sumptuousness lay floating in the silver bowls cluttering his lunch table, fried okra, masala, pasanda, and paneer…every time he unzipped the carrying case of worn green cloth he’d take a breath and his eyes would glaze over. Bite by bite, Saajan was coming back to life. 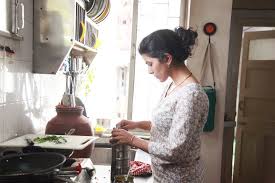 Ila too. For her husband could care less about her culinary talents, or her, or their young daughter for that matter. So, after that first day when her lunch box comes back with the bowls licked clean, she knows that someone else has eaten what she’d so lovingly prepared by mistake. Still, she sends another lunch box the next day, and with a note tucked inside the folds of one of the naan.

Saajan writes back, and so their daily exchange begins.

An endearing film but also quite sad. What struck me most and stays with me still now, was Saajan’s quiet, internal struggle with growing older, how it comes upon us without our even knowing it. “How did I become old suddenly?” Saajan’s last note to Ila, after being confronted with the reality of their disparate ages, “When did it happen? Was I sleeping all that time?” Yes, he probably was. Grieving more like it. Now he must move on, gracefully, into that stage of life. But what is that stage of life? That which we all fear so? In the end, the film makes us wonder, and, unexpectedly, leaves us with some hope that that stage of life might, in fact, might be up to us.