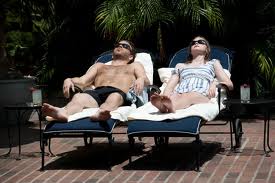 I liked the movie Somewhere. It made me feel nowhere for exactly one hour and thirty-eight minutes, and sometimes nowhere isn’t such a bad place to be. The movie takes place in sunny, laid-back Los Angeles; a movie star’s career is waning, he’s used up, uninspired, a tired-looking-kind-of-handsome. Idle, aimless, we proceed to watch him wile away the days in the vintage Hollywood hotel suite that has become his home and quietly form a relationship with his pre-teen daughter, whom he takes in when the girl’s mother goes off on a sudden and extended stress-induced retreat. They play guitar hero, ping pong, she makes exquisite eggs benedict, he smokes cigarettes, she makes delicious macaroni and cheese, he drinks beer, they drive around in his Ferrari, lay by the pool, have a tea party in the deep end, they share a few words here and there. Other than that, it’s a lot of nothing. A lot of being. One and the same. Sounds familiar.

There seems to be no need for dialogue in Sophia Coppola’s films, nor action.

The quirkiest part of the film was a random excursion to Milan. It’s a publicity event. They stay at the lavish Savoy hotel, in a penthouse suite equipped with its own pool and Jacuzzi tub carved out of purple marble. More of the same kind of nothing happens, only it’s now happening in a language they don’t understand: room service, jet-lag, gelato, bizarre Italian TV; then he’s on TV, in one of those same shows, receiving his Telegatto while scantily clad Italian veline dance around him to the beat of an Italian show tune familiar to many known by none. It’s the surreal of the surreal; the kind of TV show you’d think was purposely created to deride Berlusconian television, unless you yourself had not spent a significant amount of time in Italy….

“You know the expression “it’s like watching paint dry”? Well, there’s a scene in this movie where you are actually watching paint dry. On a guys face. And you can hear him breathing as it is drying. It’s not actually paint, but it’s very much a similar substance. Rather than being written by a creative woman, this looks like it was written by 3 bored 11 year old boys who are fascinated by:

If you want to watch a Ferrari drive down a road (or in circles), Stephen Dorff smoking a cigarette – the whole cigarette, or drink a beer, this is your film. Personally, I’d rather watch actual paint dry.”

I laughed out loud when I read this, wondering what it meant about me.