She sees him everywhere… 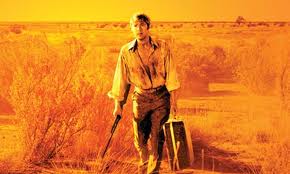 A rural schoolteacher makes a stop in an outback town on his way to Sydney and his life quickly descends into hell. Martin Scorsese, director of Mean Streets, said the 1971 film “Wake in Fright” left him speechless. I wouldn’t recommend it to my worst enemy. It wasn’t enough that the movie was so visceral and shocking, something else happened before I saw the movie, as if to prepare me for the movie itself.

The 1971 film, a nomination for the Palme d’Or at Cannes, the only copy recently saved from a recycle bin, was now enjoying a weeklong run at the Film Forum in vivid restoration. My husband and I arrived early, anticipating a crowd. Twenty minutes early to be exact, I begrudged as I sat down and my husband went to the restroom. Barely a moment passed before something felt off. No, alarming. And it wasn’t the fact that there was only a sprinkle of people throughout the seats that were normally jam packed. It was what was playing over the loud speaker. 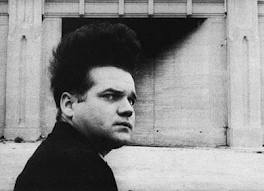 My husband came back to find me scrunched down in my seat, frowning and wincing, ready to put my hands over my ears. What the hell is this, my eyes screamed at him. He laughed and sat down. “It’s the music from Eraserhead,” I told him, disconcerted and certain. David Lynch’s first movie, the one my husband made me stay up late one night to watch because I’d never seen it and, according to him it was “one of the best movies ever made!” The freakiest movie ever made but that’s beside the point. The point is static. Static comes to mind when I think of Eraserhead. And static is what was coming to my mind now, as I listened to the music emanating from the netherworld that wasn’t apparently going to stop.

I looked around as if a ghost had passed through me. Dad? A visit long ago he’d made to New York, my father one morning engrossed in a NYT crossword puzzle (and every morning since I can remember), at one point he called out to whomever might be listening: “What is an aborigine musical instrument from the Australian outback?”

We stared at him in disbelief. Who the hell would know that? He would, and even how to spell it.

Back to the present, I grabbed the arms of my chair. It didn’t sound like music. No pauses, chaotic beat, disconcerting rhythm. “Oh my God.” I gasped suddenly, jolted by a croaking sound. A beating drone oscillated through a variety of pitches and speeds, but every once in a while a squeak or groan would leap out, almost out of no where, like beasts calling to each other in the wild. A deep harrowing purr, a curdled roar, was someone dying? (Click here if you dare to listen) I glanced over at him again in near shock, but he’d already settled in with soccer scores on his iPhone. He seemed at peace. For my part, I couldn’t stop squirming and fussing.

“Calm down,” he said at one point.

“We still have fifteen minutes to go.”

I noticed how the music seemed to soothe him. (He grew up, among other places, Australia.) He then explained to me how the continuous sounds are made using a circular breathing technique. Breathe in, breathe out, store air in your cheeks, and as you blow the last remnants you inhale simultaneously through your nose. It’s intense, not to mention cleansing and good for you, he added. My father’s deep and strong baritone voice came at me then in all its purring, hypnotic glory. The demons of many souls have been unleashed by that voice, and I felt my father now trying to reach out to me from the other side.

A vision struck me then, my father seated in his favorite leather recliner, a didgeridoo between his knees, his mouth stretched over the opening, “Did my father have a didgeridoo?” I turned and asked, frantic, but almost certain. Highly unlikely, was his response. The “music” was playing tricks on me, I decided, as alcohol and debauchery and the devil of the outback would soon do to the mind of the poor wayward soul in the film, bringing both of us memories that did not exist.

It’s spiritual, I kept repeating the mantra in my mind, in my father’s soothing baritone for the next few minutes. Ultimately I did relax. I did settle in and listen to the music. I let him talk to me. And it was beautiful.

I confirmed everything later. I was right, after all. My father, ever the curious soul, did have a didgeridoo. In his seventies and suffering from sleep apnea, a doctor had recommended one to him to strengthen his breathing muscles. My father journeyed to a small town in the California foothills to find one, where in the back of some music store the owner sat with my father and taught him to play.

The instrument sits propped in the corner of some closet now, unused but not forgotten, with the rest of his possessions.