Recovering from an Italian Thanksgiving 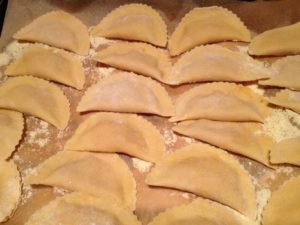 There are just two of us, after all. What do you want to do? Not much. After Sandy didn’t feel like much. After throwing out all that food… Violet Hill Farm sells those free range, organic turkeys. We could try one I guess. They’re probably pretty good. I know. But that’s all. No stuffing, none of that other stuff. No way, just the turkey. We should have one other thing. You really can’t eat just turkey. Roasted potatoes, after some thought. That’s weird you should say that. Weird why? I bought all these potatoes thinking the same thing.

Twelve pounds? That was the smallest they had. But twelve pounds? Don’t worry, I’ll make turkey polpette (meatball). Like I said, I’m worried.

Hey, I have an idea. Oh? You know I still have that butternut squash from Keith’s. Yes, suspiciously. He hesitates, never mind. What? You’re going to say no. How do you know? Risotto, is my weary guess. Ravioli, he says. I’m not allowed to say no. He gets hurt when I say no. Do whatever you want. I’m a sucker for his ravioli.

You ready to start? I’m in the office. The turkey’s sewed up and in the oven, its innards, the neck, feet with their nails still attached, reducing in a pan. The roux is next to it, a thickening mixture of butter and flour, an idea for his celebrated gravy that came to him in the shower that morning. Start what? I might need your help. I’m thinking about a half moon shape this time. He holds up a round cookie cutter. You fold them over. That’s fine, but what do you need me for? It’s a rhetorical question. I know what he needs me for.

The pasta maker’s attached to the dining table and everything’s all laid out. I come over and sit down before a bowl, not a small bowl, of bright orange stuffing. He’s rolling out the first sheet. I’m watching him, quietly pondering our original, ‘not much’, conversation. I’m thinking, here we are celebrating Italy rather than America, and how it was inevitable that his country and its food traditions would come to overshadow ours. It is simply unconscionable for an Italian to have a celebratory meal without pasta. He cuts the circles. I spoon on the stuffing, fold. He shows me what I’m doing wrong. Too much stuffing. Too little stuffing, No, close it like this. I’m closing it like that.

Isn’t this fun? Is he, or is he not, being facetious. We’ve done this before, after all. It never ends well. Though this time it does feel therapeutic, I admit. Perhaps because we are listening to Edith Piaf, the French jazz singer, sing about depression and love. I’d seen the movie La Vie en Rose, fell for it and bought the album. It’s the alcohol, I tell him. It was the end of her, in the way food might eventually be the end of us.

Two hours later, I peek at the ball of dough to find it miraculously gone. Is that really the last one? He’s just rolled out a sheet the length of a broomstick. Yes, he smiles. I fall out of my chair and cry, Thank God. We count them. One hundred. I’m wondering which lucky souls will ever taste them. He’s counting out the ones we’ll eat tonight.

Twelve for him, six for me, they are steaming in bowls before us now, soaked in a butter sage sauce. I finally bother to ask what’s in the ravioli stuffing, besides the squash: parmigano, egg, and breadcrumbs. And they’re not called agnolotti because agnolotti have that very specific, pork and veal stuffing, right? I’ve endured the passionate pasta lectures enough to know by now. And the shape…agnolotti is square, right? Or it’s the region of provenance, that’s it, it’s a Piemonte thing. I’m rather proud of this knowledge I now behold, though for the first time he himself looks confused. Normally he’s very passionate about the rules, but tonight he shrugs. In the cookbook it said Tortelli di Zucca. Tortelli? Agnolotti, ravioli, tortelli, tortellini, tortelloni, who knows, ten Italians might give you ten different answers.

On to the turkey. Which really won’t be celebrated until it turns into polpette tomorrow. By the way, what would your grandmother think if she knew you were substituting turkey for veal into her polpette recipe?

She’d say in that case be sure to add butter.