My Midnight in Paris 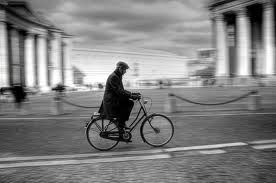 The streets were dazzling after the evening rains. The shops closed. I watched a few couples pass by with umbrellas from where I sat at an outside table in a mostly empty café on the rue Saint-Placide. In the Left Bank, not far from the streets where Hemingway’s characters wandered about in The Sun Also Rises, and A Moveable Feast; not far from the street where Gil sat in drunken despair in Woody Allen’s film, Midnight in Paris, just before an antique roadster rattled by, swept him up, and transported him back to a better time, a better Paris, a purer, richer, truer life.

Perhaps a roadster was about to sweep me up too, I thought rather whimsically, for unlike Gil I harbored no notion of a “golden era.” There isn’t a place I long to return to. I took a sip of wine, a toast perhaps? No, a resignation; I’m unromantically pragmatic. I know that the present is all I have. That is until, alas, something did approach me. Granted, it was only nine o’clock not midnight, and it wasn’t the Fitzgeralds in an antique roadster but a middle-aged man on a bicycle carrying a baguette. Helmetless, a tweed blazer and scarf, he rode with a simple elegance, an envious freedom. My gaze followed him until he disappeared into the chilly night and into my imagination, where I watched him roll into his flat, seek warmth by the kitchen stove, then take a seat at the table before his bread, a hunk of cheese, a glass of wine in the soft yellow lamplight. He seemed happy. 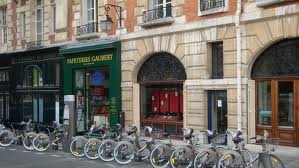 Back to the cafe, my gaze settled on a long row of Velib bicycles parked just before me (Paris has one of the most successful bike sharing programs in the world), and on an impulse I hopped onto one. No helmet. No gear. No fear. I put some Euros into the slot and took off in the direction of that man and his baguette. After just a few turns I was gliding along the more bustling Boulevard Saint-Germain, past stymied cars and taxis paused at traffic lights, my hair splayed behind me, the wet air freezing my face. I imagined Picasso, Van Gogh, or Hemingway stepping out from one of the cafés, waving at me, and then disappearing into a misted side street. Their ghosts and the precious artifacts they’ve left behind for us to contemplate are for me what makes the present richer, and why Paris feels so alive—them, and that man on his bike with the baguette, who seemed to have eluded me.

A dark ominous shadow rose up before me. Caught up in its power, I no longer felt my legs. The last time I’d pedaled like this was in yoga class, and I was on my back. Now the work felt effortless, apart from me. Notre-Dame, I’m not sure how long I remained possessed by the sight of it, just that suddenly, all at once, an intense silence came upon me and I stopped my bike to peruse the surroundings. It took a minute for the reality to sink in. For suddenly, miraculously, there were no cars anywhere. Only bicycles filled my vision, a sea of them, streams and streams of them, rivers of bodies leaning this way and that.

I turned and fell in with those headed along the river. When I reached the Pont Royal I flew over it like a breeze, while just the other night I had sat in a taxi and inched my way painstakingly across, for one thing I noticed on my return to Paris was that it had become a victim of traffic of Bangkokian proportions. Through the Tuileries I pedaled on, the bright lights of the Champs-Elysees beckoning. No sputtering. No honking; just softly spinning wheels all around me, a ring every so often, a voice behind me, “Attention, a gauche.” 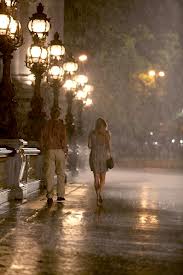 My legs wouldn’t stop pedaling. I circled around the Arc de Triomphe in a strange flowing quiet, then across the Pont d’lena, down along the dark and sultry Seine from which I rose to greet the Eiffel Tower. All the while it wasn’t the glittering Paris night that gripped me as much as the quiet. Certainly there was a time like this in the past where bicycles prevailed, and certainly it was a better time. A Golden Age. Perhaps at last I’d found mine.

By the time I’d returned…to my senses… it was midnight. Still at the café, my wine glass empty. I paid the check, and just before leaving pondered the row of bikes one last time. Could it work? I walked back to my hotel.