I’m bedeviled by the power of oration. Bent, swayed, I succumb to intellectuals, the all-knowing authority, the rules and laws of a primal order. And I blame it all on my brother. I was five when he, ten, wowed me with his logical and eloquent explanation as to why he should get the last chocolate chip cookie instead of me because of some ratio of body mass to portion size. One last flash of that tenderhearted smile, “Plus you know you love me,” and I was sold. His gift of persuasion grew as he matured, as did my awe and reverence as he took command of audience after audience, as he ran for and won various elections and honors. My brother falls into that fringe category of humans that can speak at length on any subject—from basketball to basket weaving—with eloquence, humor, gravity, and depth. He even held a mystical power over our cats, corralling them home from distant lands around the neighborhood simply by one sonorous coo of his voice.

I have since been disciple to other masters, men or women with the uncanny ability to turn half-truths into absolutions via cunning insights and sheer belief, all of it packaged into a captivating, off the cuff speech. They don’t just convert you; they make you fall in love. Bill Clinton just did it at the Democratic National convention.

Joaquin Phoenix does this to me every time he acts. Even after his torrid behavior of recent years, I endured a viewing of I’m Still Here, a documentary made by Casey Affleck who follows Phoenix along his dysfunctional journey towards becoming a rap singer. I only learned later from a friend that the film was a hoax. “Are you sure?” I implored, feeling like an idiot. “It’s common knowledge,” she replied.

Sometimes I wonder if I’d follow one of these individuals off the side of a cliff. 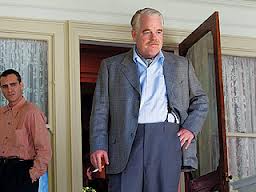 And then there’s the film The Master. Forget about the film’s subject matter for a moment—a lost soul who meets his messiah—the film itself is a master: with Paul Thomas Anderson directing, and Phoenix and Philip Seymour Hoffman acting. The film owns most of the coveted awards from the Venice and Toronto film festivals, and like a dutiful disciple, I flocked to the theater the day it opened.

Freddie, an emotionally destroyed WWII war veteran, wanders around from job to job, unhinged, sipping from a flask of moonshine, a concoction he creates with whatever chemicals he can steal or get his hands on. He’s angry too, and probably sexually repressed, like most of the characters in Anderson’s films, think Adam Sandler in Punch Drunk Love (a favorite black comedy of mine), or Daniel Day-Lewis in There Will Be Blood. Anderson uses 70mm film to give everything a rich, sensual quality, as if the men weren’t already seething enough.

“You are not an animal,” Dodd proclaims to Freddie, who has stumbled his way onto the cult leader’s cruise ship. You do not have to fall victim to your every instinct and emotion, purports Dodd, who begins unleashing his Scientology-like techniques in an attempt to “cure” Freddie. Freddie, in turn, becomes Dodd’s disciple, his pupil, his confidant, his thug. The actors give every last ounce of themselves to their roles (Joaquin is a gaunt waif in comparison to his sloth days of I’m Still Here), and the film does not disappoint. How daunting it must have been to act in the face of your white whale every day. The bar for high quality film just went up. 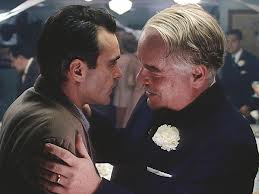 But here’s where I stopped just short of falling off that cliff. As any good disciple might, as I might, I figured Freddie would follow Dodd to the ends of the earth. Forget about whether he thinks Dodd is “making it up as he goes along,” wouldn’t Freddie remain devoted to Dodd simply for the love, kindness, and friendship he bestowed upon him, and for no apparent reason (though he does admit to the sense of having met Freddie before). Freddie has been taken in, literally, and I was taken in too, for Freddie’s doubt unleashed itself too suddenly and finitely for me. Where did this rationality and wisdom suddenly come from? Or maybe it has nothing to do with intellect, it has to do with the fact that nothing has changed: Freddie just does, Freddie just acts. If Freddie wants to go, Freddie goes.

Irrespective, as a result, I came out less enthused than when I walked in. While I knew that I had seen something unique, singular in its power, mastery, and even mystery, something eluded me. Freddie eluded me, and the black box of his dark and disturbed mind that the director failed to unlock. I can’t quite put the film into words, or, as my husband keeps saying, “I’m still trying to get my head around it.”