Love as a Dialogue 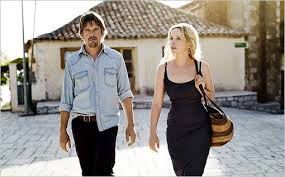 Sometimes I think of love as a dialogue, an exchange of ideas, one long conversation. Dreams, desires, hopes, fears, awe, surprise, frustration, anger, regret. And then all that unmemorable, banal blather. I’m a sucker for films that explore this notion. Before Midnight does just that. It’s the third film in a trilogy by Richard Linklater about the relationship between a French woman, Celine (Julie Delpy), and an American man, Jesse (Ethan Hawke). Their “conversation” starts in 1995 in the film, Before Sunrise; they meet on a train traveling through Europe, and, on a whim, decide to get off and spend the day together. Falling in love. The second film, Before Sunset, takes place ten years later. Jesse has written a novel based on their brief encounter, and, curious, she comes to his signing in Paris. Their conversation continues, as if it had never been interrupted.

Now, in Before Midnight, another ten years have passed. Celine and Jesse have young twins and are living in Paris. We are long past the heaven and hell they went through to be together and well into the reality of what it means to be in love, long-term. 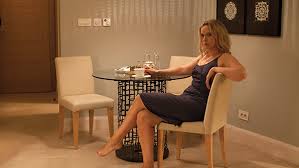 The setting is a picturesque seaside villa in Greece where Jesse and Celine are on vacation with their children. They have dropped off Jesse’s teenage son from his first marriage at the airport, and Jesse is left agonizing, again, about not being a daily part of his son’s life. “This is the exact thing I vowed I would never do, and here I am, doing it.”

This will be a long day for Celine and Jesse, one of intimate reflection and futile debate, as Celine is also in the middle of a crisis regarding her career. She seems worn, and tired of compromise. Aged. Both of them in that middle place. “It’s hard to find the passion that I had when I was younger, that’s all I’m saying,” Jesse confesses at one point. He doesn’t need to tell her this. She knows him that well. “It’s about the search,” she offers, unenthusiastically. “We’ve got to keep searching.” 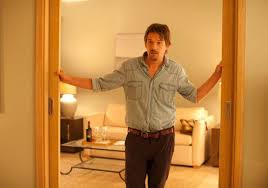 We spend the day with them musing over these ideas, and other little delights of life. The film’s takes are long, uncomfortably so; we feel closed in with them in whatever space they are consuming: a car drive back to the villa, a stroll into a village, a lingering Mediterranean lunch with friends, and, for the finale, an evening in a stark, gloomy hotel room. We see their every last wrinkle and bulge, as if their battles were our own.

Are we separate beings? Or a blend of each other?

Their dialogue feels real, stream of conscious-like, tangential. A dream becomes a memory, which 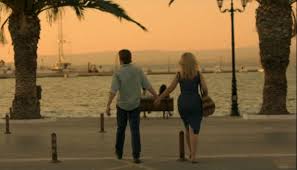 triggers a thought, then a question, which leads to no answer. A fight might erupt suddenly, and then just as quickly dissolve. They are less patient with each other, perhaps, than they once were. They laugh less, it seems, and sigh more, all the while a playful, flirtatious current never ceasing to flow between them. Sometimes their sarcasm is pointed. Cruel, because the consequence of knowing someone that well is to be able to trigger the reaction you desire. All the while the dialogue keeps going, a force of it’s own. Even when someone wants to end it, to walk out, to leave. Why does someone always want to leave? It’s strange. As if the forces of nature are against us.