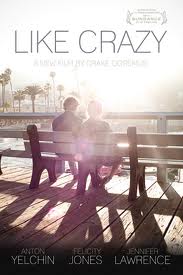 Remember the last time you said that? Didn’t think so. And, at first, as I was sitting in the theater with a dozen other patrons, singles like me, all of them women, I asked myself five minutes into the film, “What am I doing here?” The story intimately follows two college seniors falling head-over-heels in love with each other. My teenage niece should be here, not me, I thought. Can I participate in a moment like this any longer? Without feeling silly, pathetic, or even worse, envious? It was the stay-up-all-night-staring-into-each-other’s eyes kind of love spiral, and yes, ten minutes later I said yes, of course I should be here. So should you. Go, for young love is as real as real gets, not a dream, not a fairytale, I don’t care how old or hardened you’ve become. It reminded me of 500 Days of Summer. Love is so tenuous and fragile, so fearless and strong, so unpredictable under the influence of life and the things it throws at us.

She’s British, he’s American, and visa issues soon forbid them, in a physical way, of being together. She’d made the mistake of ignoring INS restrictions on her departure post graduation, stayed longer than allowed, and later, as a consequence, the INS did not let her back in. A long distance relationship ensues…. “You’re killing me,” he says, at one particularly heartbreaking airport scene. Who can’t relate?

After graduating business school, the man I had recently fallen for in similar fashion returned home to Italy for one month, to vacation but also get his work visa. He half joked about the INS not letting him back in. I laughed too, understanding nothing at the time about foreign countries, foreignness, that that threat was a reality. I was more concerned about surviving the thirty long, unendurable days without him, the days of love letters and postcards. He got back in, of course, for he wouldn’t have left had he not been certain. He’d had many dealing with the INS by then––H-1s, F-1s––(and a Green Card later care of me) and the one thing he remained adamant about was not screwing with the INS. They will win and you will loose; they will not relent. As if a relationship weren’t already hard enough.