Let there be Carnage 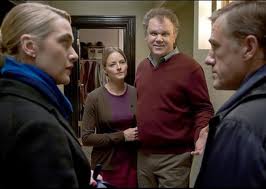 Question: are we civil beings at our core, or animals? Can, say, educated, mature, reasonable people solve conflict through rational discussion? Two couples, the Longstreets and the Cowans, meet over coffee and apple pear cobbler (with gingerbread crumbs) in the movie Carnage to test the theory. They have gathered to discuss the fight their two boys had on the playground that morning, what ended in two lost teeth.

“We are all decent people,” says the victim’s father, who is played by John C. Reilly as he invites the Cowans into his and his wife’s (played by Jodie Foster) tasteful, Brooklyn home.

“Nobody cares about anything beyond himself,” says the accused boy’s father, played by Christoph Waltz, a no-scruples lawyer who can’t be apart from his Blackberry, which he persistently enjoys barking into. He has come to the meeting only because his wife (Kate Winslet) has dragged him there.

The God of Carnage, as Waltz’s character later explains, is this idea that our species has not evolved from its animalistic origins. We fight, maim, and kill; this is how we solve problems. We pretend to be civilized, want to be civilized, but can’t help being uncivilized.

When I was younger I often wondered why I couldn’t speak what was on my mind. Or write it, for that matter. It’s not illegal (in the US anyway). But, like everyone else, somewhere during my maturity I adapted. The consequences were too unpleasant if I didn’t. Arguing can lead to exposure, and mortification. I now politely temper my thoughts for my audience, or, more likely, I’ll just walk away.

This is what I found so unnerving about the movie, that the Cowans didn’t just walk away. They had many chances, made it as far as the elevator, but each time were drawn back inside the apartment, and for no particularly enticing reason that I could see other than that God forbid you should walk away disliking each other.

In this case, they should have, for no one can seem to change the other’s opinion (can one ever?), the result of which, as they continue relentlessly down this path, is a reduction to infantile behavior.

Winslet, Waltz, Reilly, and Foster are high profile screen actors. A similarly revered group was recruited for the Broadway play written by Yasmina Reza, from which the film was adapted (James Gandolfini, Hope Davis, Jeff Daniels, and Marcia Gay Harden). I did not see the play. I had wanted to see it, fully expected to, but then I read a New York Times review profiling it as an otherwise good production that became a rave because of its Hollywood star fever. Not going is a decision I still regret, because anyone you talk to that has seen the play does nothing but rave.

What did I miss?

I’ll never know about the play, but if it’s like the movie, I missed little.  The characters are stereotypical and depthless, the writing thin, if not false. And this is Polanski (and Reza) at work…

Plus, once you’ve seen Who’s Afraid of Virginia Woolf—a toxic mix of two highly educated couples, dark demons, and alcohol—the question of civility turned savagery should end. After that, walk away. There’s nothing more to see or say about our species after witnessing this massacre.