Kingdoms rise in one’s own world 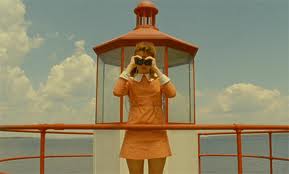 The film Moonrise Kingdom is set in the sixties but the place Wes Anderson takes us to is timeless. No time, no clocks, no cell phones, no computers. Just an old record player, some books, a cat, binoculars, gum, left handed scissors—prized possessions—all of which one might take on an escape across the fictional island of Penzance. All that, and a really good boy scout of course.

Or in this case, a “khaki scout.” Sam is twelve, a resourceful oddball who is hated by his khaki scout mates. Suzy is the girl Sam falls in love with, instantly, as she does with him, and it’s the two of them who are escaping.

The film opens with a glimpse into a doll-like house on an idyllic coast where Suzy lives with her family; up and left, down and right, the camera pans into rooms that feel disparate, like own worlds unto themselves: mom in mom’s room (the kitchen), dad in dad’s room (the study), and children in the children’s room. We see Suzy in this room quietly reading whilst burning inside with some unknown despair; her three younger brothers sit nearby listening to an old record player. 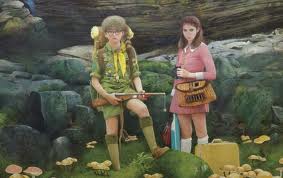 Sam and Suzy’s journey is daring (if not offbeat, humorous, and fantastical), one only a curiously ingenious khaki scout might attempt. Children playing adults, adults playing children, we’re never quite sure, and that’s how Wes Anderson wants it to be, how he perceives the world. Do we ever really grow up? And if so, what are the indicators, exactly, that we have done so? Is it when we get our first job? When we have kids? Our kids have kids? When things “are complicated?” This is the phrase we use to explain our lives to children: “It’s complicated.” As if their lives aren’t. Sam’s parents are dead and he’s been shipped from foster home to foster home, and Suzy’s are full of misery for reasons we don’t fully know but can probably guess.

Cut to Sam and Suzy’s adventure, this other world they create for themselves, a place where problems are addressed with shameless honesty (and in twelve-year-old underwear). The simplicity of their exchanges, at once beautiful and powerful, remains elusive to us as adults, to us as children for that matter. So the nostalgia the film evokes is not about lost innocence or youth, but about the unattainable, this uniquely personal Wes Anderson world, where what you say is what you really mean, even if it means you’re going to wet the bed.

And if this world is fictional, why does it feel so real?

At one point, Suzy with her blazing, teal shadowed eyes sits in a tub while her mother washes her back trying to both console and council her about Sam. “We love each other,” Suzy says with that arresting fearlessness.

Why is that so hard to believe?

It’s a relatively tender moment for Suzy and her mother, even when Suzy says with the same arresting fearlessness, “I hate you Mom.” “Don’t say that, you don’t mean that,” the mother responds. “No, Mom, I really hate you.” It’s simply the truth of things, like her love for Sam. And yet the adults choose not to believe any of it.

A planet of different planets. This is where Wes Anderson takes us.

At one point during the film my nephew and I both couldn’t stop laughing, and then beyond him my sister and stepmother, we were all laughing. Weren’t we on the same planet in that moment? That’s what it felt like, all of us, one planet. It was a feeling that stayed with me long after the film ended, before I had to remind myself that in reality I have no idea what each of them had been laughing at, or experiencing in that moment. Even if I was my nephew’s age once, even if my stepmother was my age once, those ages for each of us are gone, worlds we will never enter into again.