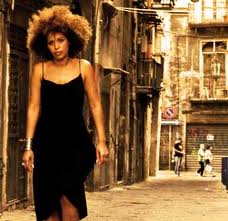 John Turturro’s documentary, Passione (2010), is an ode to the city of Napoli and a menagerie of its music. There is no beginning, middle, or end, we simply wander down dark alleys into beaten down piazzas enticed by exotic women and mysterious men, professional musicians or people the director pulled off the street belting out songs full of heartache, melancholy, urgency, and desperation. Rhythmic, operatic, theatrical, classical, flashes of jazz and hip-hop, undertones of Africa and Cuba… This, the city most tourists observe from train windows as they pass by on their way to the Amalfi Coast or Capri, or skip altogether, unable to fit it in with itineraries to Rome, Venice, and Florence.

I’ve always loved finding new music. I’d wander into Virgin Records on Union Square and peruse the aisles listening to random albums they had on display, always finding something intriguing, bringing it home, and uploading it into iTunes. Then Virgin went away (it’s a Citibank branch now), as did the concept of the “album” for me. I found myself suddenly stranded and lost, stuck in a time warp of my five and ten-year old playlists. I can’t seem to advance to purchasing one-off songs on iTunes. I can’t help be swayed by the “favorites” meter; I’ll listen to the song clip, then get frustrated and slam the laptop shut.

Am I becoming my father? 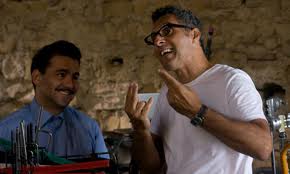 Good, bad, or ugly, an album tells a story. The stepchild songs of that album, the runts, are part of that story. And without the story I’d lost the picture. Passione brought that picture back, if only momentarily, like food for my music-starved soul. During the course of the film I listened to at least a dozen performers, not all of who were harmonic, some were even disturbing. In a few cases I had to force myself not to mute the TV, as if I’d inherited the ten second listening tolerance of my nephews, no doubt acquired by the free song clips on iTunes.

I muted no songs. I respect Turturro; he was pouring out his heart to tell me the story about this strangely singular, rapturous city of his heritage. I was going to listen, and it was worth it.

Along a shimmering bay, beneath a moody Vesuvius, Neapolitan life pulses and thrums, a city that’s been ravaged, beaten down, built back up, beaten down again…a blend of cultures. No performer sounds the same, because not all music sounds the same, lest we forget. Like a foreign language, one’s ear must be tuned in order to comprehend, one must listen over and over until the sound has settled under their skin, and then soon one can’t imagine the album without the song. Like Napoli, the city, if given a better chance than a day trip for a pizza, one day one might not be able to imagine an Italy without it.