Italy, Cinema, and Me 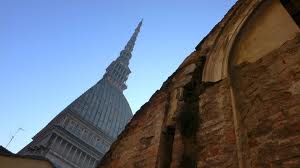 I’m no cinephile. I simply enjoy movies and the emotions they provoke, the conversations they initiate. They take me to places I might not otherwise go. Like Turin’s National Cinema Museum, on a visit to Italy recently, my husband and I ventured out of his parents’ home to see it, in-between meals and to his family’s dismay—because why venture out when your family, everything you need, is right here?

To see this museum is a bizarre experience. A little like my experience of being married to an Italian: surreal, impossible to interpret, at once I am participant and observer, caught in a mirrored maze from which there might be no escape.

The exhibit is housed in the Mole Antonelliana, a giant spired dome in the city center. Originally a synagogue, the city bought it in 1878 to transform it into a monument of national unity. It is now the symbol of Turin. 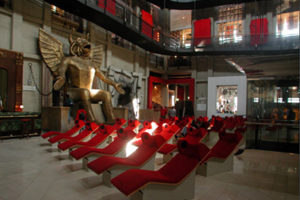 You enter into an immense and spectacular hall, where a colossal winged genie sits ominously to one side, next to Caffé Torino, there to represent what film in Turin was pre WW1—its creative center, a hub, a place for intellectuals and artists to gather and collaborate. Around the interior base of the dome sit themed “chapels” showcasing the multiple layers of film: the films themselves, but also books, scripts, photographs, posters, props, costumes, cameras, and projectors; films’ origins, history, and process; the players, performers, writers, producers. In the center of the hall people relax in a plethora of red chaise lounges and watch film montages on two large screens, one themed of dreams and nightmares, the other showing iconic moments in film. The few minutes I rested there I watched Marlon Brando moon an old Parisian lady at a dance hall in The Last Tango in Paris. 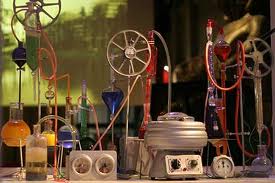 Up into the labyrinth, stairs unravel like a film reel. I come upon a fifty-foot wall papered with a copy of the script from Psycho, the scene where Bates has his eye in the peephole, peering into Janet Lee’s room. A red, circular matrimonial bed is presented for us to lie on and view movies playing on the ceiling above; my husband won’t go near it. Down a darkened hall we run into a very bloody scene from the Exorcist. Further down, a movie poster from Taxi Driver, behind me, through a mirror, a reflection of Dracula. Onward, a room presents itself as some kind of mad scientists’ laboratory, a homage to those that worked to advance the technology of film. No signs anywhere say anything about NOT touching, a refreshing change from America. A nude photo of Marilyn Monroe hangs encased in a gold leafed frame, though it is hard to get a peak, what with all the elementary school boys crowded around it. A gigantic reincarnation of Robo Cop, scenes from Almodovar, then, literally, my husband and I enter The Matrix, there we stand in the reel with Keanu Reeves and Carrie Ann Moss. La Dolce Vita, La Babette, Blow Out, Fellini’s hat and scarf, Hitchcock, Italo Calvino; a special exhibit devoted to Looney Tunes and Speedy Gonzalez. There I am, displayed on a dozen or so tiny television sets. A life-sized photo of Marlene Dietrich, Bonnie and Clyde, the studios, MGM, a David Lynchian video of Dorothy dancing down the yellow brick road, the munchkins singing her on. In reality she’s going nowhere, it’s an illusion. A gremlin; my husband follows Wile E. Coyote through a wall; a starry blue room filled with toilets. Cabiria (I have no idea what movie that is). Over a whiskey stained, post brawl fight saloon bar plays the climactic scene from The Good, the Bad, and the Ugly. The Creature from the Black Lagoon is encased in glass. Black and white photos of Judy Garland, Frank Sinatra, and Bing Crosby. Replicas of sixties styled, TV-centric living rooms. The largest film projector in the world. Movie posters from Apocalypse Now and Spellbound, Il Settimo Sigillo…

By the time we are done I feel as if I’ve just tunneled through a kaleidoscope. Visions of that matrimonial bed linger. I ask my husband to translate its description in the guidebook. “Love and Death: A long dream. We articulate our dreams like they were scenes from a film. The matrimonial bed, the soft light, films play out on the ceiling without asking us if we are awake. 1900s is evoked, a time of amorous passion, where everything is a dream. To dream, to sleep, to maybe die.”

Jaws rears up at me on our way out. I wasn’t sure where I was at that point, blinking into the light of day. Then I remembered—for it was almost one o’clock and we were at risk of arriving home late for lunch—I am in Italy. Dai, in fretta, muoversi.