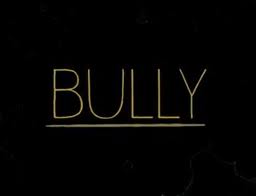 When I was in fifth grade, a seventh grade boy hated me. I didn’t know him, had no reason to interact with him, our paths never should have crossed. Yet, somehow, he’d discovered me (and my red hair), and decided that I was the one. He’d wait for me to arrive at school, usually early because I rode the bus, and he’d stalk me. Bleached hair, tall, and mean, that’s all I remember. Not popular, he was one of the “bad kids.” Hiding proved useless, he’d hunt me down and call me names, unrepeatable here. Our field stretched out in all directions, and if you stood at its fenced perimeter, the school appeared as a dot on the distant horizon. No-man’s land , particularly at seven a.m. when no one was around. I often found myself running towards the fence for dear life, my bully in his trench coat in hot pursuit. This went on for weeks, though I never told anyone. In retrospect I wonder why, as it seems like the logical thing to do but if you watch the film Bully, you get the idea that most kids don’t let on about such things, for what, really, can be done? Even the administration is helpless (the lip service one of these “educators” offer in the film is chilling). I finally just let him catch me one day. I gave up, he wailed away at me, I didn’t fight back. When he was done I brushed myself off, and sniffled my way back across the field with him pacing after me, getting in those last few taunts, with less vigor now, less hatred, drawing further and further away. I got the idea he felt bad. I got the idea he just wanted a friend.

I’m so glad I’m not a kid anymore.

Nothing has changed. The documentary Bully is a painful reminder of that. A poignant, moving portrayal of what has always gone on in schools, still goes on, and will likely go on forever. Who doesn’t recall that horrible bus ride? My situation was on the tame side. For some kids the bullying goes on for years, and, seeing themselves with no way out, they take matters into their own hands. In some cases this means ending their own lives. The film wasn’t so much an eye-opener for me as it was a reminder. There is no such thing as an outcast, and you can’t survive without at least one friend. Be nice. Help out. Stick up for people. Go say hi to the new guy. Smile.