I wish the Lakers had won.
I wish I had a dog.
I wish my book would sell a million copies.
I wish my dad were still alive.

Koichi wishes that the active volcano in his town would erupt so that he and his mother would have to move, and thus be reunited with his younger brother and father. The boys’ parents have separated due to irreconcilable differences.

The director of this quietly captivating Japanese film, I Wish, Hirakazu Kore-eda, also directed Nobody Knows, a story about four young siblings forced to survive on their own after their mother abandons them. The stories might sound bleak, but the adeptness and grace in which Hirakazu captures the hearts and minds of children is intensely rewarding to watch. I Wish is languorous, fragmented, and meandering in the first hour as we wander around in the two parallel lives of these brothers, the older contemplative and searching, the younger adorable and silly, getting involved in not only their lives, but those of their parents, teachers, friends, anybody, for that matter, that they might come in contact with. Hence the meandering, hence I had to force myself to stay relaxed, calm, shed the hard shell of adulthood for the next two hours and find my inner child, she who was impressed by everything and anyone she touched, she who felt everything, and understood little of it. 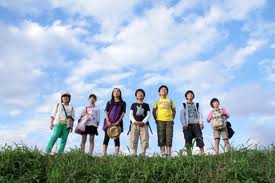 The way in which the director pulls these wishes from the actors on camera feels unscripted, ad lib, as if these really were their wishes. Their last wishes, because at some point in a child’s development the moment of reckoning comes and all wishing stops, the real kind of wishing anyway. The director takes us to this moment slowly, with sensitivity, grace, and, ultimately, unbridled passion. After other wishing exercises prove fruitless (the volcano still intact), the two brothers and their friends make plans to meet at a given destination because Koichi has heard from an elder that if one stands nearby two trains passing each other at this destination, at a certain time, and he makes his wish, that wish will come true.

We spend a lot of this trek running around with seven, backpack-strapped kids. It’s hilarious, exhausting, and fun. If not unrealistic, but it doesn’t matter. The movie is worth watching just to see what happens when the kids get to their destination. And afterwards, what happens with the wishes. Some even come true. Others come true in the simple fact that the child now believes it has come true, and the power of that belief makes the wish irrelevant (A once insecure girl, decides to go to Tokyo to become an actress). Other wishes don’t come true. And still others, in the end, aren’t made at all.

When’s the last time you wished for something?