My love affair with Andrea Pirlo 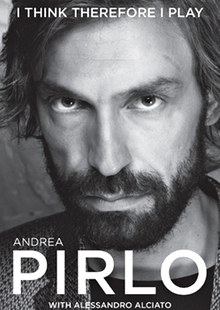 This was the text message I sent my husband towards the end of final match between France and Italy in the 2006 World Cup Final in Berlin. He was sweating it out live there; I was sweating it out before my television here. It was a burst of brilliance on my part, I thought then, and still think today. It just hit me all at once. We’d been to Germany the first two weeks of the tournament, been to all the Italy games, sat in the midst of all the chants and cheers about Carnavaro and Buffon and Totti and the aging Del Piero, but by the end I was like no, no, it’s about Pirlo! I felt like I had discovered this amazing creature. Sure, maybe everyone else knew he was one of the best, but did they really, like this?

I don’t claim to be an expert on the intricacies of soccer, a player’s strategies and techniques, what goes on in his head, but one gets a sense for these things after spending one’s formative adult years peering over the shoulder of one’s husband on what are supposed to be those lazy Sunday mornings but are actually periods of extreme tension and biting silence intermixed with that rare, explosive outburst, either positive or negative, it’s hard to tell unless I’m watching the action myself. 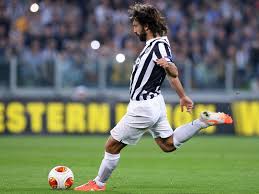 He was twenty-six back then. Thirty when he was traded from Milan to Juventus. I remember the day my husband told me the news, somewhat despairingly, that Milan was getting rid of Pirlo. He was old, past his prime, his years numbered, and Juventus was picking him up. He spoke flatly, without inspiration; he’d wanted so-and-so, or so-and-so. I put up a hand without hesitation and looked him straight in the eye. “This trade is going to be the best thing that’s happened to Juventus since…,” I stumbled here. Since what, I didn’t exactly know. All I could manage was a “You’ll see.” 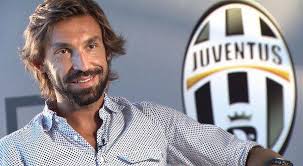 Pirlo’s autobiography is out, “I Think Therefore I Play.” The word think isn’t the first word that comes to mind about a Play Station fanatic, which Pirlo admits to being in an excerpt I read. But alas, the idea of him curled up on the couch battling it out with his teammate Nesta is kind of adorable, and makes me worry less about my football fanatic nephew. Apparently, Pirlo’s played three times as many fantasy games as real games (I’m pretty sure my nephew’s got him beat), his dream team always Barcelona, the team that once tried to recruit him, unsuccessfully. If Pirlo has one career regret, this would be it. (For me, it would be the beard. Does he need the beard?)

From the pitch to the Play Station and back, two hours on the field, two hours on the couch, a man in his thirties. My nephew, at eighteen, has maintained a similar routine with his dream team, Liverpool; from the pitch to the couch to the pitch, an endless cycle. His dream, still and unforgiving, is to be a professional football player, and sometimes when I watch him on the field I’m wondering if he thinks he’s inside the game on Play Station, as Pirlo had once described it, manipulating his feet with the dials, seeing the play from behind a screen, outside looking in. Or was he inside looking out, waiting for his master to press the right buttons so that his feet would dance and spin the way he wanted them to. Were his thumbs quivering out there? Is it hard for him to distinguish the difference? Fantasy or reality, does it all start to blend together after a while?