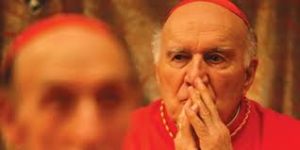 “We Have a Pope!” It’s so full of hope, that phrase. And then when you hear it in Latin, Habemus Papam, with all that passion and emotion, it sounds even better.

We settled down to watch the movie, surprised to have found it On Demand when it’s still playing at the IFC. I support the IFC, but lazy we were.

Wonderfully directed by Nanni Moretti, a tragicomedy that seems comical only because elderly men of faith wearing thick, long robes and speaking in the melodic gesticulating language are, to me, inherently funny. If not endearing, because these cardinals are really just human. They have needs, desires, aches, pains, fears, hopes, and dreams too, like a warm cornetto straight from a street baker’s oven at 3 am. But it’s not funny, because certainly, as the movie suggests, the desires these men have foregone in the name of God are not absent but repressed. In wait, perhaps, to be resurrected.

In the film, the cardinals have convened from all corners of the globe to attend the Papal Conclave, to elect a new Pope, a secretive process which has not changed over many centuries, a process which goes something like this: the Cardinals arrive at the Vatican; they are literally locked (cum clave) in a building of the Vatican isolated from the outside world until their votes are cast (voting takes place in the Sistine Chapel) and a Pope is elected with a two-thirds majority; ballots are burned, white smoke ascends from the chimney (instead of black, which symbolizes a failed vote), a sight that brings a roar from the depths of millions of awaiting worshippers, and after some procedural necessities, the Man himself appears on the balcony of the Basilica of St. Peter to bless them.

Every election, at least since the thirteenth century, has followed this same process, mostly. What happens inside those walls no one ever really knows, and so this film provokes the audience by imagining what that might be. In this rendition, the newly elected Pope, just before stepping out to perform the Urbi et Orbi, releases a primal scream from within his own dark depths. “I can’t do it!” He then descends into self-reflection and depression, wandering the streets of Rome, while the cardinals, who must remain sequestered, spend the rest of the film waiting (somewhat humorously) for the man to come out onto that balcony.

The weight on a man so worshipped, so idealized, so burdened—not only is he not seen as a man, he is far removed from man; when in fact that’s all he is.