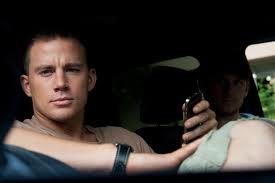 That’s how Magic Mike is billed, wrongly in my opinion. This is a Soderbergh film, after all, as in Sex, Lies, and Videotape, about an impotent man who videotapes and interviews women about their first sexual experience (See REEL LIFE: A Novel, Chapter 6); as in Haywire, about a female covert operative played by a prize winning cage fighter in real life; as in The Girlfriend Experience, about a New York call girl played by an ex-porn star in real life. A consistent Soderbergh theme: good-hearted (not to mention good looking) characters performing extraordinary feats in subculture contexts.

So ‘Girls Night Out’ it was, (not for me though, my ‘girls’ live in other parts of the country), for the theater was packed, anticipatory buzz surrounding me when I squeezed past some giddy, cougar-aged women to reach my suboptimal seat. The contingent behind me was already fomenting unrest. I haven’t been in a theater with this kind of manhunt vibe since I saw Tom Cruise in Days of Thunder, when one particular woman, who will remain nameless, stood up and gave the loudest catcall I’d ever heard as Tom made his appearance. 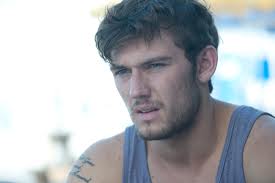 Soderbergh factor aside, I was also in it for the eye candy. Although, after watching Matthew McConaughey, the club’s aged and malevolent father figure, squeezing his you-know-what after just one minute before an audience of teeming, unattractive, pathetically desperate women, I wasn’t sure how I was going to like the movie. My mind shot to scenes in The Sopranos: were the men salivating at the female strippers of Bada Bing portrayed this poorly? Answer: no.

But who cares, because the gorgeous beasts took the stage, the gyrations began, and while I watched at first detached amongst the whoops and hollers, after a while that detachment waned.

The flesh kept coming. In fact, there was much more of it than I had expected, more dry humping and hip-pumping than I ever thought I could stand. But, strangely, the more it went on, the more mesmerizing these bodies became for me (and perhaps that’s just what the director had meant to achieve, a separation of bodies from their men, of objects from their emotions, something not so easy to achieve with women so kudos goes to him), and found myself hypnotized. I sank lower in my chair. I tilted my head back on the seat. I relaxed as those around me, those who began raucously, grew ever quieter, as what was unfolding before us became, well, intriguing.

That’s probably not the right word. 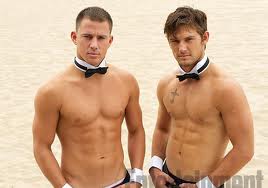 Perhaps the only way for me to describe my response is to describe what was for me the scene that makes the movie. Magic Mike, played brilliantly by Channing Tatum, takes under his wing a lost and aimless college dropout whom he meets at one of his many “entrepreneurial” endeavors, and brings him to the club. Turns out that The Kid, as the guys begin to call him, is a natural. His older sister Brooke, however, on whose couch The Kid’s been sleeping, is apoplectic about this, and one night she shows up at the Tampa club to witness her brother’s newfound profession with her own eyes. She then stays to watch Magic Mike. Sure, Channing is mesmerizing, but it’s Brooke who makes the scene. Soderbergh cuts between the two of them, lingering on her expression as she stares at Channing’s glistening, thong-cladded limbs as he wriggles and thrives about the floor, her expression unmoving and unreadable on the surface while you, me, and the audience feel every last wild thought in her mind—the surprise, the awe, the embarrassment, the guilt… It’s an amazing two minutes, worth going to see the film for.

Plus, it was just a hell of a lot of fun.