Getting in The House 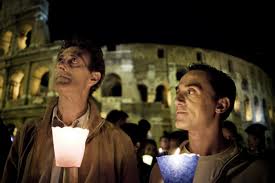 Over the past thirteen years the reality television show, Grande Fratello (Big Brother), has remained a feral sensation in Italy, one far surpassing even its British and American counterparts. Italians rich and poor, young and old, northern and southern, pious and not, gather around their small boxes each evening to watch, riveted, twenty or so gorgeous, half naked men and women wandering around a posh, sprawling mansion. They party, fool around, and do generally whatever it is they feel compelled to do, uninhibited, the world’s eyes upon them. It’s rather sordid, kinky, and strange, like Italian TV in general. It’s this gap between the show’s participants and its watchers that has always flummoxed me, so vast as to be incomprehensible. 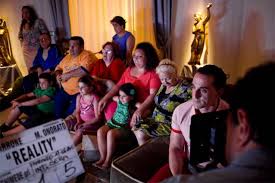 In the new film Reality, director Matteo Garrone, who also directed the riveting crime film Gomorrah, depicts the story of Luciano (Aniello Arena), a gregarious and loving husband, father, son, nephew, cousin, brother, and reigning fishmonger to the quaintly derelict Neapolitan piazza where he and his family live. It’s the kind of place where everyone knows everything about everyone, and decisions are made in small kitchens crowded with women, large in numbers and volume. They are adorable, Luciano’s extended family, their obsessive closeness the most charming part of the film. It is this family that, one day, stumbles upon a Big Brother audition at the local mall and convinces Luciano, the performer amongst them, to try out.

A new glimmer hits Luciano’s eyes. Something shifts. Changes. He makes the first cut and takes his family to Rome for the second audition. Afterwards he is ecstatic, breathless as he tells his wife that he’s sure he’s made it on the show and into the pinnacle of all houses, the house to beat all other houses. For he’d revealed his darkest secrets before the judges, even that bad stuff of his past. He’d confessed it all. He’d bared his soul. 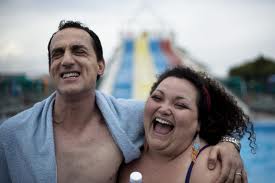 Back in Napoli, while waiting for the studio to call with the news, Luciano sells his fish store (St. Peter was a fisherman…), he is not sure why exactly, it’s just something he feels compelled to do, like a calling. Plus, he’s become plagued with the feeling lately that he’s being followed, that the Big Brother judges are spying on him, assessing his character, making sure he’s worthy of The House before making that much awaited call. Each day that passes with no call brings more spies, more eyes (or guardian angels), Luciano’s every move judged. (George Orwell’s 1984 comes eerily to mind. Good thoughts only, else Room 101.)

He begins to give away his possessions, showering kindness on the poor and homeless. At a cemetery with his family, he beseeches two pious women in black—more spies—to tell him, honestly, if he is going to make it into in The House. “The house?” they ask. When they realize his reference, they reassure him that yes, he will make it into the House, but that he must be patient, he must not lose faith.

Garrone deftly juxtaposes religion and Big Brother until they finally become one. Luciano’s religion, his beliefs, his Church, has become Big Brother and everything it represents. It’s the light that shines from his very core. This is where the film transcends from cute and charming to dark and melancholy as Luciano’s quest for heaven (the House) descends him into hell. 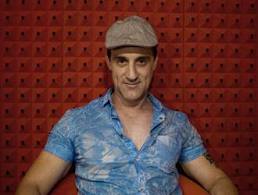 Luciano is not a depiction of some microcosm of Italian life but a depiction of the modern world. We all want to be stars because to be a star is to live on and on forever, to be perennially observed, and more than ever in today’s world we can—on You-Tube, Twitter, Facebook, podcasts, blogs—24/7, we are there for anyone out there willing to see and listen.

As Reality ends, the camera pulls away from a lit window looking into the set of Big Brother, and as it pans out it becomes like a lone star shining from an otherwise darkened, sprawling landscape of tiny shadowed boxes in which live all the lives that don’t shine, that we don’t see on TV or hear about in the news, all the lives we will never know existed.