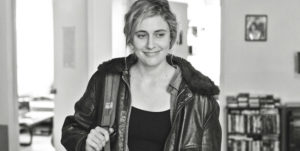 Noah Baumbach, for now, has found his muse. Greta Gerwig. The two of them co-wrote Frances Ha, which Baumbach directed and produced, a small, off-beat story about a struggling dancer in New York. Greta Gerwig is not so much an actress to me as Greta Gerwig playing different versions of herself, like Diane Keaton or Mia Farrow, Woody Allen’s muses. See my post on Gerwig in Damsels in Distress, a movie I’m still scratching my head about. Frances Ha reminded me, if only slightly, of a Woody Allen film. Though I would never compare him to another director. Baumbach, who also wrote The Squid and the Whale, Happiness, and Greenberg, has this uncanny ability to ignite visceral reactions within me via the quiet and darkly funny way he captures human interactions. The Squid and the Whale about a boy coping with his parents divorce, is one of my favorite films of recent times.

The plot of Frances Ha is loosely based around the friendship between Frances and Sophie, roommates who have been BFFs since college, almost like “a lesbian couple who don’t sleep together.” But soon Sophie moves out of their apartment for one in better pastures (Tribeca), an area where Frances can’t afford to live, and the two grow apart and distant. Sophie’s seemingly indifferent relationship with a Goldman banker whom Frances is sure she doesn’t love, does not help their relationship. 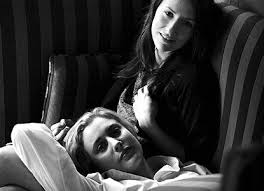 It was a pleasant way to spend ninety minutes, with Frances, so real and alive. Desperate. Nuanced. The kind of person that lights up every frame of every scene with something unexpected. She’s not much of dancer though, and barely manages to hang on to her understudy job at a modern dance company. But where she inspires is in the streets of lower Manhattan, or Brooklyn, where she might break out into a sudden tap dance (who hasn’t done that?) or bound across an intersection in a series of grand jetes to the soundtrack of David Bowie’s Modern Love. Filmed in black and white, the film in ways feels like an ode to New York.

What’s interesting, and refreshing, about the story is that Frances, who refers to herself as “undateable,” is searching for a connection more than she is for “love.” It’s a testament to the writers’ will that no handsome prince comes to save her in the end, or destroy her. Just odd friendships, acquaintances, interactions—life—and then, in the end, the realization that Sophie will always be there for Frances, a shared glance from across the room, a secret between the two of them. That connection. What she’d wanted all along.

But then it occurred to me after the film was over that perhaps I was, in fact, watching a love story. One between the director and his muse, for this film felt like a gift of love from him to her, from both of them to each other, and maybe that’s why Frances never fell in love with anyone else. The writers wouldn’t let her.