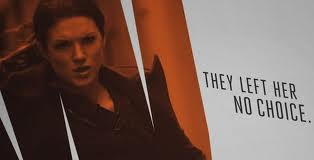 Women’s Cage Fighting airs sometime around early morning on cable television. It’s what Steven Soderbergh was watching when he came up with the idea for Haywire. (It makes me wonder what he was watching when he came up with the idea for Sex, Lies, and Videotape, an all time favorite of mine and Chapter 6 of my novel, Reel Life.) Two words: Gina Carano. Soderbergh decided this particular early morning that he would make a movie entirely around her because, well, that’s just what directors with well-deserved “legendary” statuses get to do. What they want. It’s a raw, gritty action film at its core, minimalist with dialogue, score, emotion, and plot, but that’s O.K. if you’re male, because it is the beautiful, steely-green eyed Gina you are there to watch, in every scene, the camera tracking her every move in long, raw, drawn out fashion, even when she’s just pacing down a street. Until she rips into cage fighting mode, fights in a way only she can fight, which means no stunt men or stand-ins or special effects. It’s her on the end of every single punch. In fact, the fighting is so real it doesn’t seem real, especially when she takes down poor, doomed Ian McGregor, in all my amateur honesty, it just seems silly and fake.