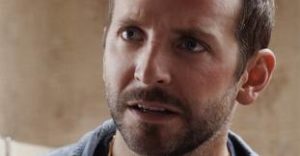 Alone I go. Bradley Cooper is, after all, Bradley Cooper. Worst case scenario I simply stare at him for two hours. What turned out not to be the case. If I found Cooper adorable in Hangover, then I found him stunning in Silver Linings Playbook. And not for his looks; the man can act. His performance as Pat, an undiagnosed bipolar just released from a stint in a psychiatric hospital, is no less than phenomenal. 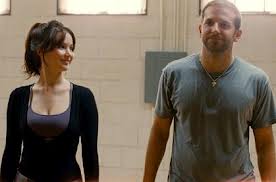 Pat’s goal, he assures his parents (wonderful performances by Robert DeNiro and Jackie Weaver), is to “get focused,” to “come up with a strategy,” to stop letting negative thoughts rule the world, “to find a silver lining!” First and foremost, though, his goal is to win back his wife, a delusion about which he is no less than manic and obsessed. This quest is what drives the movie forward, unpredictably and chaotically, especially after Pat meets his real match in Tiffany, played to visceral perfection by Jennifer Lawrence (heroine of The Hunger Games, the soul of Winter’s Bone), a dark, brooding, depressive, a self-proclaimed “recovering slut.” Two souls trying to find themselves and each other, to hear Pat and Tiffany banter about prescription meds is to watch a symphony or, better yet, a jazz performance. It’s the sharp, jeering dialogue that drives this film to such great heights.

That, and its unpredictability; you never know what Pat is going to say or do next, certainly not compete in a dance performance… Pat lives in the moment. His eyes dart about, his mood swings are often violent, his words are “without a filter,” his behavior is obtuse, and his thoughts ramble on in monologues that are disjointed and genuinely hilarious. 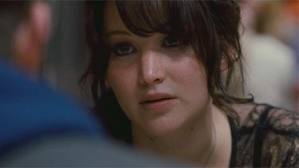 The filmmaker, David O. Russell (Flirting with Disaster, The Fighter), will cringe when I say that I felt hints of Hangover as I watched Silver Linings, even though the latter is a far more reaching and substantive film. But there is a wacky lightness to the film. Is there no other person who can say “What the fuck” with such exacting pitch and ferocity as Bradley Cooper? On a quest to read all the books on his wife’s literary syllabus (she’s a high-school teacher), Pat spends an entire night reading one of them cover to cover. When he’s finished, he closes the book, exclaims “What the fuck!” and chucks the book out the window. As the book lands we see the title and fall out of our chair.

As funny and visceral as Silver Linings Playbook is, it is also a serious film about undiagnosed depressives and those afflicted with bipolar disorder. People who can live and function in society, but only on the sharp, cutting, harrowing edge. Imagine a life like that; it’s what the filmmaker ultimately lays bare for us. The unending labor, the ridiculous effort it takes to exist, what would be impossible without the love, commitment, and support of family and friends, without the love of another who not only understands your afflictions, your core, but accepts them like she does her own. As Tiffany says, “There’s always going to be a part of me that’s sloppy and dirty, and I’m OK with that.”