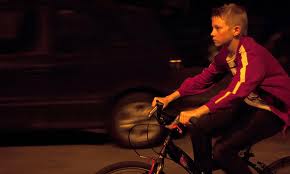 Le Gamin au Velo’ (The Kid with the Bike), a Belgian movie, in French, about a boy who’s father, deciding he can no longer care for him, simply disappears. The kid, placed in a school for wayward children, goes on a desperate search to find his father, and his bike, which went missing with the father. Numbing, especially for someone like me, whose parents never failed to provide.

And yet this is not an alien theme in my life, my father’s father abandoned him in similar fashion. One day he was gone, scarring my father for life. Still, I left this movie in disbelief. It was the simple brutality that was so vexing, for the father is not abusive or mean, just selfish and indifferent (he sells the kid’s bike for the money). He just, plainly, didn’t want the kid anymore.

I checked some stats when I got home. One out of every four kids grows up without a father. There are those that died, but it’s the ones that abandon their kids that leave irreparable damage, boys who grow up without focus, drift aimlessly, have little of any confidence in themselves.

The actor who plays the boy is stunning. He is the film. So mesmerizing was it to watch him portray such a wide array of deep emotions…as it was painful… There is redemption in the form of a woman who takes in the boy, initially fostering him on weekends. She buys back the kid’s bike, an act of unselfish kindness, and you’ll be thankful that she did, for the most sublime scenes in the film are of the kid riding either desperately or languidly on this bike.

This child is not easy to care for; he is sullen, troubled, and unpredictable. And yet the woman does not give up on him, even in the most trying situations. I had to assume some kind of loss in her past, some tragedy in her life that would make her persevere with the boy where any other normal, good intentioned person would not. I would have given up, and, because the writers refrain from telling us her motives, I was left thinking long after the movie ended about them, until at some point it occurred to me that not knowing was the whole point, the reality of life—we’re left guessing. A father gives up his child, a woman takes him in, a boy steals, robs, and bullies. We don’t always know why people do the things that they do.