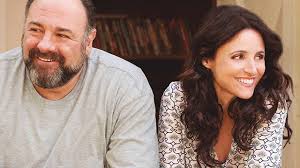 Dallas Buyers Club, The Great Beauty—while the two bold and devastating films that I saw last weekend swirl around my psyche, I’ll write about a film not so bold and the opposite of devastating, Enough Said.

I still watch Seinfeld reruns. And like every woman my age who does, they probably see a piece of themselves in Elaine, like how she reveals secrets when she’s drunk, pines over J.F.K. Jr., eats only the tops of muffins, or, when taking the subway, is always crowded next to the man with the worst B.O.

In cases like these, it’s hard to separate the character from the actor. When I see Julia Louis-Dreyfus play other roles I often still see Elaine. And likewise, when I see James Gandolfini, I have a hard time not seeing Tony Soprano, or Virgil from True Romance. The difference is that I want to see Elaine. Elaine makes me laugh. I don’t always want to see Tony or Virgil. They are rough. They scare me.

In Enough Said, a quietly affecting movie, Julia and James play characters nothing like Elaine and Tony. Eva and Albert are single, middle-aged, divorced, and each struggling with an only child leaving for college. They aren’t attracted to each other physically at first, but at some point in the midst of their first date, they do fall for each other. “He makes me laugh,” Eva tells a friend. It’s as simple as that. He makes me laugh. Laughter is sexy at that age, at any age. Laughter can be a game changer. 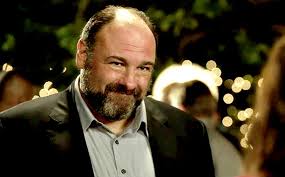 Behind a slightly gruff and expanded exterior, Albert is tender, sweet, and vulnerable; both Eva and Albert are, in all their unassuming simplicity, she a masseuse and he a movie librarian. They deserve the warmth of each other’s company, and I found myself rooting for their companionship. Perhaps it was the writing, the cinematography or the directing, but their moments together were so touching and intimate that I often felt embarrassed, like I was intruding.

As the movie progressed I began to feel the loss of Gandolfini press upon me, because I imagine that he was like Albert in many ways, a gentle soul, and nothing like the characters that have made him famous. Knowing of Gandolfini’s death at the time I watched the film made the experience somewhat strange, and disconcerting. Gandolfini was overweight, and one could assume his size had an impact on his death, and it was strange to watch Eva be concerned about Albert’s eating habits in this way. It’s when real life takes over fiction, and I’m not sure what I’m watching.

A tribute perhaps, to both actors, and I’ll leave it at that.