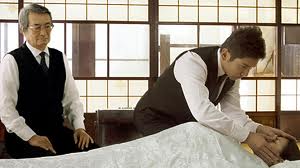 On the phone with my father, talking about movies. He was eighty-two at the time, sharp witted, if forgetful and nonlinear. He’d just seen a movie on Netflix that had deeply touched him, though he couldn’t remember the name of it. “Foreign,” he stammered. “Japanese” came with a cough.

“Departures,” I returned without delay, for my father was the only person I knew who reached for the morbidly obscure like me. The movie won an Oscar for best foreign film in 2009, the year I’d gone to see it at the IFC, and until now, three years later, I’d not run into one other person who’d seen it.

I should have known it would be him.

The movie is about a young man, Daigo, who, accepting the limits of his talent as a concert cellist, moves back to his hometown with his wife. Aimless, desperate, he stumbles into an apprenticeship for a nakanshi. An undertaker of sorts, nakanshi prepare the bodies of recently deceased for burial. In rural parts of Japan this is considered a ritual, the body bathed, dressed, and positioned in an intimate, moving ceremony before family members in their home. This, their time to grieve, accept, and say goodbye.

In the movie, which manages to be both sublime and hilarious, Daigo finds not only his true calling, but also a father figure in the nakanshi master, a theme my dad had by now honed in on with me on the phone, no surprise. At the end of the movie, Daigo’s real father, who’d been absent for most of his life, calls and tells him that he’s dying and would like to see him. There is a long silence, before Daigo agrees.

“Did you know I had the chance to see my father before he died?” my father said, and there was an interminable pause. “No, Dad, you didn’t.”

“I was forty-eight, in the midst of my divorce, and one day I get a call from my aunt.”

You have an aunt?

“She tells me my father’s got cancer, and that he would like to see me.”

I was a bit dumbfounded. As my father had cryptically told it, his father left him when he was a boy, and he’d not seen or heard from him since.

“I understand, Dad.” It was just something to say, for I’m not sure I did, would, or could ever understand the depth of my father’s loss. Standing at the window, I looked out onto the lights of the city in which I lived now, the city far and opposite the sandy beaches of my childhood, where my father still lived, and a loneliness swept through me. “Well,” I said into the silence, in a tone that said it was time to wrap things up.

I closed my eyes.

“Did I tell you about that other movie I saw?”

But he couldn’t remember the name of that other movie, so I said, “Crazy Heart.”

I always did, often before he did.

He goes on to describe the scene in which Jeff Bridges’ character, Bad Blake, calls his son and apologizes for being a sorry ass of a father, for not being around much. Then my dad pauses to address me again, “Did I ever tell you that my father called me once?”

Silence on my end, for I’d often asked my father if his father had tried to contact him, for any small tidbit or anecdote from his childhood for that matter, but all I ever got back was a blank and distant stare, and now, as he went on to explain that long lost call, and why nothing ever came of it, I stood wondering what movie we might turn to next, and if we might not, in fact, get to the bottom of things in just this way.