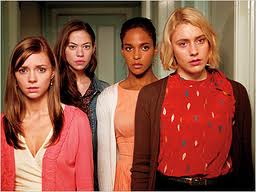 I’m still scratching my head about this movie, just released, by Whit Stillman. In fact, early in the viewing, I contemplated walking out. I sat there in my seat, embarrassed. It was a beautiful spring day in New York, I could have been reading a book on a park bench, going for a long walk, contributing to the world in some way, anything…

The story is about four college women struggling with men and identities (why are those two so intertwined?). I had just come from a weekend with my three college friends, the four of us reunited for the first time in ten years, and these Stillman damsels, I was sure, in no way resembled anything I new about college women. The setting is any campus, any time; all we have to go on is that the women wear sixties-style dresses, and there is only one instance of a cell phone being used.

You start to realize that the movie is a bit farcical. The dialogue “intellectual,” witty, and entirely unrealistic. Yet Violet, the lead damsel, started to warm on me, as peculiar as she is, and I thought, well, maybe that’s a good thing. Peculiar is refreshing. Plus, I could no longer pretend that she didn’t remind me of one of the damsels in my own foursome.

Violet is seriously off, a woman of no category. Her ideas come from left field, like the theory she has that it’s more humane to date unhandsome men with limited potential because this is a chance to help them become handsome and find their potential. “So you’re attracted to doofi,” says Lily, a new skeptic to the group (she and Violet having already conferred about the correct plural of the word doofus), and Violet does not disagree. She is not ashamed either, for it is her quest to save the fraternities housing these doofi from destruction. A campus faction wants to ban “Roman” letters from the school because of their elitist, exclusionary culture. They’re not elitist, Violet argues back, how can they be elitist if they’re morons? We can’t take the roofs from over their heads. Morons need a home, too. She and her friends also run a suicide prevention center, where tap dance is offered as a means of therapy. Her dream is to be the catalyst for a new dance craze.

You see why she would drive you nuts?

I stayed. As the movie progressed I couldn’t help being drawn into the black hole that is Violet, a deeply troubled woman, vulnerable, lost. Her name isn’t even Violet, we learn; Violet is simply an identity she’s created for herself, and the movie poses the question, shouldn’t we all be this way? No, according to Lily, the only damsel that I could remotely relate to. She tells Violet, towards the end of the film, the world should not be made of unique, eccentric, self-created individuals. Rather, society would do better with one big mass of “normal,” a mass she plans on being part of from now on. I cringed, ever so slightly, at the sound of my college self. But no bad feelings, is Violet’s response. Let the dance craze begin.