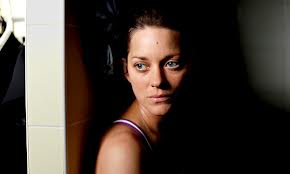 Rust and Bone, a French film by Jacques Audiard, who also directed The Prophet, stars the sublime Marion Cotillard as Steph, an Orca trainer who loses both her legs above the knee in a fluke accident at the Sea World-type Cote di Azure park she works at. Ali (Matthias Schoenaerts) plays her antihero, a feral man bewilderingly and frustratingly devoid of any and all emotion, empathy, or insight. An ex-prizefighter, Ali is the definition of a brute, a perpetual fuck-up in all facets of life, including the care and upbringing of his young son. He scrapes by living with his sister and her husband, working as a security guard at night, and sparing in bare-bones fights as part of an illegal betting racket.

He doesn’t fight for only the money, he tells Steph. He fights to fight, like she trained to train. 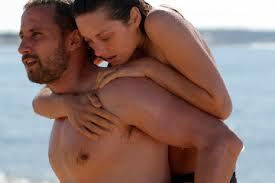 This man, and only this man, will scoop Steph out of her chair and into the sea; this man, and only this man, will pull Steph out from the depths of her lost self. From La Vie En Rose to Midnight in Paris, Cotillard’s range is unlimited, though never has she felt so real, so raw, so stunningly beautiful without costume, without make-up…without legs. Essentially, symbolically, reduced to an animal, like the great hungry beast that took part in her demise, and only because he was doing what any great hungry beast would naturally do. Feast. 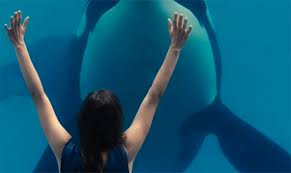 Steph is drawn to the animalistic nature of Ali’s fights, the blood and sweat. It makes her feel alive, and not alone, limping around in the rust and bone of her prosthetics. Ali and Steph take comfort in each other’s baseness, and the director takes pains to get up close and personal to show us the carnality of their copulating, as well as the ever slow and painful bonding of their hearts. Primal beings. Hungry animals. Aren’t we all? Yes, but that’s not all we are, as Steph reminds both of them at one point: we must maintain some human decently; we mustn’t behave like animals. They need each other, after all.

The film’s backdrop is the glistening Mediterranean, but it’s the beast in the tank that steals the film. Steph at one point takes the long and laborious journey in her prosthetics down to face the whale that maimed her in a glassed, underground viewing platform; what subsequently takes place between them via some symphony-like swaying of minds, bodies, and limbs, is like a mirror into the self and will be a scene that stays with you.