Cosmopolis, where everything meets nothing 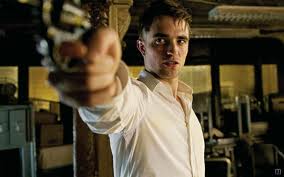 In Louis Malle’s 1981 film, My Dinner with Andre, two aging actors who haven’t seen each other in some time, one successful, the other not, reunite over dinner at a restaurant where they debate life, theater, art, and Western Civilization. Touching, humorous, sad, one of the first films to successfully build an entire story around a conversation. Cosmopolis, directed by David Cronenberg (Eastern Promises, A History of Violence, The Fly) felt like its sordid, bipolar cousin. It too is mostly a conversation, between twenty-seven-year old Eric, a ruthlessly rich and brilliant securities trader of God-like proportions, and his disciples who one-by-one come to meet with him inside his hyper-tech customized stretch limo as it inches its way across a traffic clogged Manhattan so that Eric can get a haircut. The debates, ranging from collapsing financial systems, cyber capitalism, dimensions of time and technology, human rationality and sex…I understood My Dinner with Andre much better…, come at you in disjointed bursts and are interspersed with jarring violence. Mostly, the conversation is about wealth. Eric has owned wealth and all its concepts up to this point, but money is changing…“Money has lost its narrative quality the way painting did once upon a time,” says Eric’s Chief of Theory during a conversation that takes place while the limo, caught in the middle of a violent, anti-capitalist protest, is rocking from side to side (as is the vodka in Eric’s glass). “Money is talking to itself.” Eric doesn’t want the 100 million dollar apartment; he wants to pay the hundred million for the apartment. 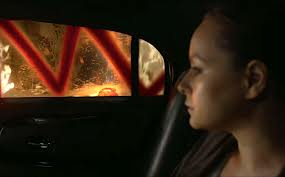 So what’s left for a man who’s reached the pinnacle, where everything meets nothing? To toy with self-destruction? Eric’s made a bet on the Yuan that’s causing his company to implode and yet he dispassionately refuses to rectify the situation while he still can. Starkly handsome, exquisitely dressed, piercingly emotionless, Eric is a zombie searching for some last bastion of humanity, to feel something. ANYTHING. The Twilight heartthrob Robert Pattinson plays the role with a cold-blooded force.

Absurd, lewd, sardonic, engrossing, ultimately I liked the film more than I thought I would, even though half of the prolific waxing going on went over my head. For all its obtuseness, the deadpan, acidly funny dialogue held me rapt, and more than a little curious. Who speaks like this? No one probably. Who writes like this? I hit The Strand on the way home from the theater. The movie is based on Don DeLillo’s 2003 novel of the same name. I had not been able to put down the author’s famed White Noise, about the year in the life of a professor who has made his name pioneering the field of Hitler Studies, married five times to four women, a brood of children. For all the book’s satire and allegory, what held me was the way DeLillo captured the simple, banal, every day struggles of life. A couple who fear death doing the dishes. After reading Cosmopolis, I wasn’t so surprised to find that the film tracked almost word for word with the book. Some of the debates still loomed above my head, and while the reviews say that Cosmopolis is one of the author’s weaker works, in my mind DeLillo is DeLillo.